His first dates since Modern Times 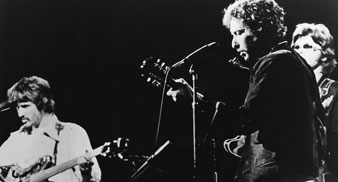 Bob Dylan returns to these shores in April for his first shows since the release of Modern Times earlier this year.

Tickets go on sale this Friday (8th December) for the following venues:


‘Modern Times’, which came out at the end of August and is Bob’s first new album in five years, has proved to be his best-selling record in over two decades – possibly since ‘Desire’ in 1976.

In a way, Dylan is as big as he’s ever been.

The first volume of his memoirs, ‘Chronicles’, was one of the most acclaimed and best-selling non-fiction works of 2004, and last year’s award-winning ‘No Direction Home’ film, directed by Martin Scorsese, drew rave notices and massive audiences as it charted Dylan’s early career and rise to fame.

As previously announced, Bob Dylan’s XM Satellite Radio shows in the US, ‘Theme Time Radio Hour’, will be aired for the first time in the UK this month.

Six of the shows will be broadcast on Radio 2 on consecutive evenings from Saturday December 23, before continuing on 6 Music on New Year’s Eve and then on Friday nights from January 12.