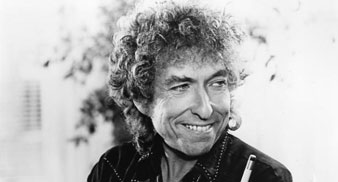 Bob Dylan‘s ‘Drawn Blank Series’ of over 200 pictures are to be displayed in London from June, following the success of his first ever art museum exhibition in Germany in October last year.

As reported previously on uncut.co.uk the ‘The Drawn Blank Series’ features new intense colour variations based on his drawings and sketches produced between 1989 and 1992 – originally published in a the Random House published book ‘Drawn Blank.’

The book’s preface declared Dylan’s intention to fully realise the sketches at a later date – and the now finished works are photo-lithographs transferred to deckle-edged paper and reworked in water colour and gouache.

The London exhibition will be held at the Halcyon Gallery in Mayfair on June 14.

The gallery have commented that the art represents Dylan’s transient feelings whilst touring, saying: “Feelings of anonymity, transience, rootlessness and sometimes loneliness pervade these representations of the people, objects and places that Dylan has seen and drawn.”

Halcyon Gallery president Paul Green has also stated: “This is an incredible opportunity for viewing this powerful body of work which gives an insight into the artist’s soul and which have already been the subject of widespread critical acclaim.”

The paintings were originally revisted by Dylan after Kunstsammlungen Art Museum (where the paintings were first exhibited) director Ingrid Moessinger showed an interest in his book. She explained, “I first came across Bob Dylan’s book of drawings at an historical exhibition about Bob Dylan at The Morgan Library & Museum in New York. I went straight out and bought my own copy and immediately began to track down the originals.”

Dylan himself commented at the time, “I was fascinated to learn of Ingrid’s interest in my work, and it gave me the impetus to realize the vision I had for these drawings many years ago.” He added, “If not for this interest, I don’t know if I even would have revisited them.”

More information about the London exhibition is available from www.halcyongallery.com.

Meanwhile, Dylan’s European tour kicks off in Iceland on May 26, and includes an whopping eleven nights in Spain, click here for details.