The mega festival is happening in Indio, California 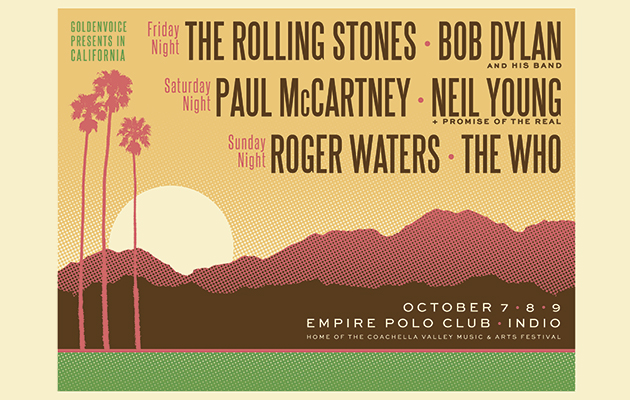 Bob Dylan, The Rolling Stones, Paul McCartney, Neil Young, Roger Waters and The Who will all perform at the Desert Trip festival in Indio, California on October 7, 8 and 9.

The festival has been the source of much speculation over the past few weeks, since The LA Times reported on April 15 that Goldenvoice Entertainment, the promoters behind Coachella Festival, were looking to hold the event in Indio, California – the same site as Coachella.

On April 20, Roger Daltrey appeared to confirm the festival was taking place, telling Canada’s Postmedia Network: “I think it’s us and Roger Waters on the same day. It’s a fantastic idea for a festival. It’s the greatest remains of our era.”

“I hope a lot of normal fans can get tickets before they get snatched up,” he added.

Meanwhile, over the weekend, The Rolling Stones, Paul McCartney and Bob Dylan post teaser videos ending with the word “October” on their Facebook pages.

The event has now been officially launched under the Desert Trip banner.

Performances start after sunset and each artist will play a full set.

The line up for Desert Trip festival is:

Pre-sale begins on Monday, May 9 at 10AM Pacific Time.

More information is available from the Desert Trip festival website.