The singer is fourth favourite to win the prestigious accolade 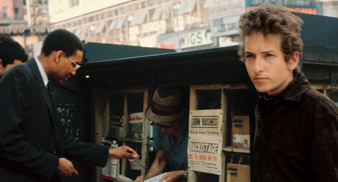 Bob Dylan has become one of the most hotly tipped nominees for this year’s Nobel Prize For Literature after a late flurry of bets on him to win have shortened the odds from 100/1 to 10/1.

Ladbrokes has said that the singer-songwriter had become a genuine possible winner after “a substantial gamble from clued-up literary fans” over the last 24 hours.

At the moment, the only writers ahead of him in the running are Japanese novelist Haruki Murakami at 8/1, Swedish poet Tomas Tranströmer at 7/1, and the favourite, Syrian poet Adonis at 4/1.

Alex Donohue from Ladbrokes said The Guardian: “We’ve seen enough activity from the right people to suggest Dylan now has a huge chance this year. If he doesn’t make the shortlist at least there will be some seriously burnt fingers. As Dylan said, money doesn’t talk, it swears. If he does the business there might be a few expletives from us as well.”

As well as being one of the world’s most respected songwriters, Dylan has published books including Chronicles Volume One, Tarantula and Lyrics: 1962-2001.

The ceremony takes place this Thursday (October 6), the same day Dylan starts his UK and Ireland tour, which begins at Dublin’s O2 Arena and ends at Bournemouth International Centre (October 14).