Bo Diddley gets a rock’n’roll send off 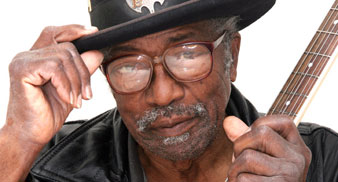 Bo Diddley has been given a fitting send off at his funeral in Florida today (June 8).

A gospel band played his songs as family members passed his coffin, before hundreds of mourners clapped and chanted his song ‘Hey, Bo Diddley‘.

Joining friends and family members, The Animals’ Eric Burdon paid tribute to Diddley and cited him as a lifelong influence:

Diddley, regarded as one of the founding fathers of rock’n’roll, suffered heart failure on Monday (June 2), which followed a recent stroke and heart attack.

Garry Mitchell, his grandson, was among those who addressed mourners, the Associated Press news agency reported.

“In 1955 he used to keep the crowds rocking and rolling way before Elvis Presley,” he said.

His music proved hugely influential on the Rolling Stones, The Who, The Clash, Bruce Springsteen and Elvis Costello.

Read our full obituary of a guitar hero remembered by clicking here.