Blur made an electrifying return to Hyde Park last night (August 12). The Britpop legends played as part of the Mayor of London's Olympic closing ceremony celebrations in central London. Performing under a giant stage set of London's Westway dual carriageway, the band kicked off with a buoyant "Girls And Boys" before launching into Parklife favourites "London Loves", "Tracy Jacks" and "Jubilee". 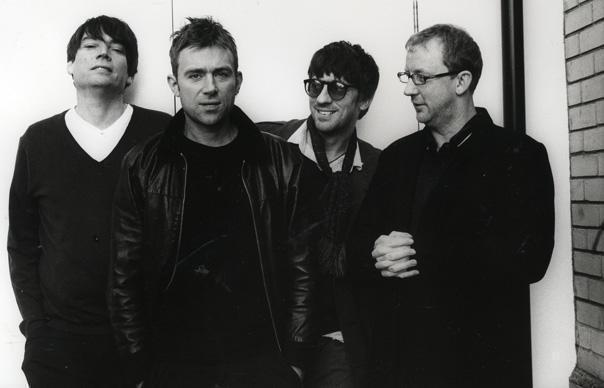 The Britpop legends played as part of the Mayor of London’s Olympic closing ceremony celebrations in central London.

Performing under a giant stage set of London’s Westway dual carriageway, the band kicked off with a buoyant “Girls And Boys” before launching into Parklife favourites “London Loves”, “Tracy Jacks” and “Jubilee”.

Moving on to 13’s “Beetlebum” and “Coffee And TV”, Damon Albarn then dedicated a rendition of “Out Of Time” to the people of Syria and the “athletes that were not able to compete because of the current political situation in their country”.

“We dedicate this to all our children,” Albarn told the crowd before B-side “Young And Lovely”. “It didn’t make sense when we first recorded it, but it does now,” he said.

A storming rendition of :Parklife” followed, with Phil Daniels joining the band on stage alongside comedian Harry Enfield dressed as a tea lady. “We dedicate this to a British institution always forgotten – the tea lady,” Albarn beamed.

“Song 2” saw Albarn bounce around the stage before a more mellow finale of “No Distance Left To Run”, a whole-crowd sing-a-long to “Tender” and “This Is A Low”.

Returning for an encore of “Under The Westway“, which was written especially for the Hyde Park show, Albarn told the crowd:
“This song was written just for you. We’ve been watching a lot of telly recently. There’s been no adverts, which we think has done us a world of good.”

Praising the athletes, he said: “We’ve seen so much graft. It’s been amazing.” Albarn also singled out double gold medal winner Mo Farah for praise, describing him as a “incredible human being”, and encouraging the crowd to do Farah’s trademark ‘Mobot’ move.

Launching straight into “End Of A Century” from a brief “Commercial Break”, Albarn jumped into the crowd amid bouncing fans, before climbing back onstage for “For Tomorrow” and a grand finale of “The Universal”.

Earlier in the day Hyde Park had witnessed performances by Bombay Bicycle Club, New Order and The Specials.