It's a rapid download-only thing from Kele and chums 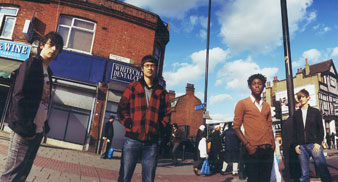 In a move which is now known as ‘doing a Radiohead’, Bloc Party are rush-releasing their third album online this Thursday (August 21).

“Intimacy” can be ordered now from www.blocparty.com. As with “In Rainbows”, a limited edition CD with extra tracks can also be pre-ordered and will be delivered from October 27. If you order the CD now, you’ll get the download on Thursday.

Intimacy appears to have been produced by Paul Epworth and Jacknife Lee, who worked on Bloc Party’s first and second albums respectively. It features the recent “Mercury” single and nine other tracks:

Bloc Party may well showcase these songs at a bunch of festival shows in the next week or two:

Or perhaps they’ve already moved on to some other stuff. . .