Plus Kele takes your questions for live web chat! 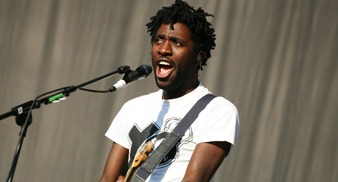 Bloc Party have announced a number of tour dates in Canada following on from their appearance at V festival in Toronto.

The band will play shows in Edmonton, Calgary and Fredricton before heading for a show in Halifax and then Montreal.

In addition to the short US run, they will hit up V Festival in Toronto on September 6.

The band are currently working on the follow-up to 2007’s ‘A Weekend In The City’.

Bloc Party’s frontman, Kele Okereke will be answering questions from fans during a live web chat on Friday June 6 at 11am. See the Any Questions Answered website for details.