BJORK TO REJOIN THE SUGARCUBES 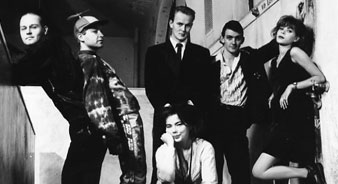 The Sugarcubes are to reform for a one-off gig in Iceland, when quirky singer Bjork rejoins them to mark the cult band’s 20th anniversary.

This concert will be the first time the band have played together in 14 years.

It is also 20 years since Smekkleysa, the band’s label, released their debut single ‘Birthday’.

The Sugarcubes were born on exactly the same day as Bork’s’ first child, in 1986. They had their first bona fide UK Top 20 single with the aptly named ‘Hit’ in January 1992.

Bjork also performed at the opening ceremony for the Olympics in Athens in 2004.

All profits from the concert, with the support of FL Group, will go back into Smekkleysa SM.

Bjork states on her website that the money will allow the company to “continue to work on a non-profit basis for the future betterment of Icelandic music”.

Other artists on the label include Gus Gus and Sigor Ros.
www.Icelandair.net are offering flight and ticket packages for the gig on November 17th.