Icelandic singer's seventh album will come out on September 27 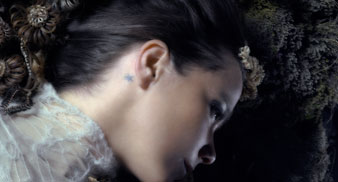 Bjork has revealed the tracklisting for her seventh studio album ‘Biophilia’.

The album, which has a physical release date of September 27, features 10 tracks on the standard version, with a bonus of three more on the extended digipak edition.

‘Biophilia’ includes both ‘Crystalline’ and ‘Virus’, both of which have been made available online. The album’s app version, ‘Biophilia App’ is already available from iTunes now.

The singer has also recently unveiled the Ultimate Box Set version of ‘Biophilia'[/url], which comes with very hefty price tag of £500. This version will include a lacquered and silkscreened oak-hinged lid case containing the ‘Biophilia’ manual, along with 10 chrome-plated tuning forks, silkscreened on one face in 10 different colours, stamped at the back, and presented in a flocked tray.

The manual will be 48 pages hardbound, cloth-covered and thread-sewn, and the package contains two audio CDs including the main album and additional exclusive recordings.

Bjork headlines the Sunday night at this year’s Bestival. She will play the Isle Of Wight event on September 11.

The tracklisting for ‘Biophilia’ is as follows:

* These songs will only appear on the digipak version of ‘Biophilia’.
Latest music and film news on Uncut.co.uk.