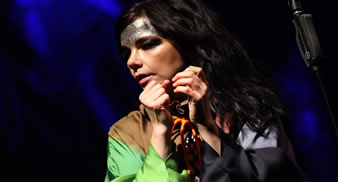 Bjork has announced that the next single to be released from ‘Volta’ will be her duet with Antony Hegarty, “Dull Flame of Desire.”

The track which features lyrics taken from a poem by Fyodor Tyutchev, will also have two specially commisioned remixes, by Modeselektor and Mark Stent, available on limited 12”.

The video for “Dull Flame of Desire” was created by three winners of a video directing competition through Bjork’s website.

The winners; Christoph Jantos (Berlin) Masahiro Mogari (Tokyo) and Marçal Cuberta Junca (Girona) were each given a section of the video to develop, all three parts being edited together for the final promo.

The new single is released on September 29, through One Little Indian.