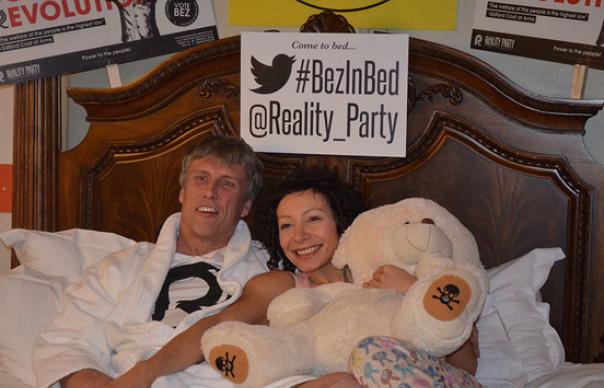 Bez and his girlfriend Firouzeh Razavi have begun their week-long ‘bed-in’ protest which intends to raise awareness of the UK anti-fracking movement.

The protest, inspired by John Lennon and Yoko Ono’s two anti-Vietnam war protests in 1969, has the support of Ono herself. In 2013 she penned the anti-fracking anthem “Don’t Frack My Mother“, which was performed by her son Sean Lennon.

Bez told NME: “We’re off to a great start because we’ve already attracted the attention of the world’s media. The fact is that 69 per cent of our land has been licenced for fracking and it’s been done without consultation with any of us. We haven’t been told about the dangers.”

Fracking is a controversial process where underground rocks are fractured in order to stimulate oil wells. Critics argue that it often has unintended and severe environmental consequences.

Bez took the opportunity to confirm that despite recent problems with the registration of the name of his political party, The Reality Party, he will still be contesting the Salford parliamentary seat at the General Election on May 7. He described the name setback as a “spanner in the works”.

He also told NME that his former band Black Grape will reform with Shaun Ryder and Kermit for a special concert in support of his campaign at the old Granada Studios in Manchester on April 11.

Bez and Razavi will be staying in bed at the Motcalm Hotel at The Brewery in London until February 15, and live-streaming appearances by special guests every night from 9pm-10pm at www.bezinbed.co.uk