Beth Orton And The Aliens Shine At Overcast Latitude 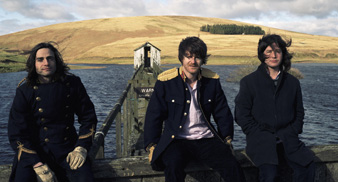 The singer-songwriter seemed overjoyed to be performing on the festival’s Main Stage after being absent from the live circuit while pregnant, telling the crowd: “This is what I would have done [two years ago] if I hadn’t got knocked up!”

Orton performed a number of tracks from her most recent album, 2006’s “Comfort Of Strangers”, including “Heart Of Soul” and the piano-led “Worms”.

Accompanied throughout by multi-instrumentalist Rob Moose on fiddle, piano, guitar and mandolin, the singer-songwriter also performed a version of “Katie Cruel”, her collaboration with Bert Jansch from the legend’s 2006 album “The Black Swan”.

The Aliens performed before Orton this afternoon, playing a set comprised of tracks from their first album, “Astronomy For Dogs”, and its imminent follow-up “Luna”.

Frontman Gordon Anderson jumped manically around the stage throughout, as the group, comprised of former members of The Beta Band, performed tracks including “Robot Man” and “Magic Man” to the large crowd.

During their final track, the band mixed up a psychedelic electro groove with elements of Primal Scream‘s “Higher Than The Sun”, The Beatles’ “Helter Skelter” and Stevie Wonder’s “Superstition”.

Check out Uncut.co.uk throughout the day for more blogs and news reports on Latitude.