Plus details of forthcoming new album 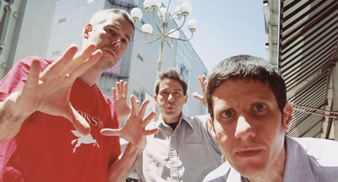 Beastie Boys are to play a second show at Bestival, the festival curated by Rob Da Bank.

The Isle Of Wight boutique festival taking place between 7-9 September, has so far confirmed the NYC hip hop veterans and The Chemical Brothers as headliners.

The Beastie Boys, whose only UK festival appearance is at Bestival, will also now be playing a second show over the weekend. They are set to play a speacial instrumental gala event in the Big Top on Sunday night as well.

As reported on the Beastieboys.com website – it is the group’s intention to play several instrumental shows as they tour throughout the Summer.

They also report that there will be a follow-up album to 2004’s “To The Five Boroughs” released this year.

“Hi… here’s a few things you might wanna know about..

Other acts recently confirmed for Bestival include the Gossip, Soul II Soul, Bat For Lashes and Candie Payne.

More Bestival news and tickets are available here from bestival.net