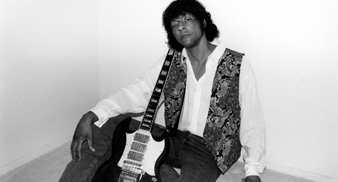 Three tracks from the Love/Arthur Lee archives, including a solo track, have been posted online on the band’s Myspace page.

There are two versions of “Signed DC” – which originally appeared on Love’s self-titled 1966 debut.

But the first of the newly available tracks is a much poppier version of the hard-hitting song. DC are the initials of Love’s original drummer Don Conka, who it is said to have inspired the song.

The second version of “Signed DC” is taken from 1969’s “Out Here” which appeared on the Blue Thumb label. According to the Myspace posting, Arthur claimed the latter was the definitive version, the one he would always play live.

The solo track posting is from Arthur Lee’s side project Vindicator: “Pencil In Hand or He Said She Said” is a Memphis shuffle-inspired tune taken from the aforementioned 1972 blues album.

Originally on the A&M label, it features drumming from Don Poncher and a guitar performance from former Buddy Miles bandmate, Charlie Karp.

“Vindicator” was briefly reissued on CD in the late ’90s with bonus tracks but is currently out of print. With Arthur Lee’s recent death, that may change.

In the meantime check out the songs at:
here