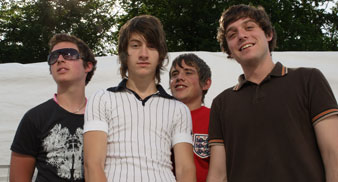 The show will follow the late Spring release of their second album – the follow up to their record-breaking “Whatever People Say I Am, That’s What I’m Not”, which did predictably well in all the end-of-year rock critics’ polls.

They band have also been nominated for a Grammy in two categories: Best Alternative Music album and Best Rock Instrumental Performance for the track “Chun Li’s Spinning Bird Kick”.

The cricket ground gig will see the Monkeys supported by their favourite bands – names to be announced shortly. They will play their longest set to date, incorporating tracks from their debut and their hugely anticipated new album.

Arctic Monkeys’ registered fans will have 24 hour exclusive access to the online pre-sale which begins on Thursday 14th December 2006 at 12.30pm. For information about the pre sale go to www.arcticmonkeys.com