Arctic Monkeys drummer Matt Helders has spoken about the band's work on the follow-up to 'Suck It And See' and has confirmed they are working on new tracks while on tour. 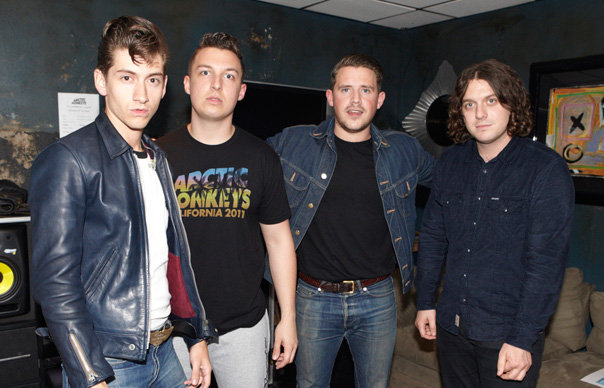 Arctic Monkeys drummer Matt Helders has spoken about the band’s work on the follow-up to ‘Suck It And See’ and has confirmed they are working on new tracks while on tour.

The band are currently in the middle of a lengthy stint across the USA and Canada as support to The Black Keys on their US arena tour and Helders has confirmed that they have been using their soundchecks to work on new tunes.

Asked by Paste Magazine if the band’s new single ‘R U Mine?’ would feature on the band’s next album, Helders replied: “It’s a standalone thing. Mainly because we kinda needed something new to put out for this tour I suppose. We’d already done four singles for ‘Suck It And See’ so we decided to do something new. We haven’t really started writing officially, a record or anything, but there’s a few things we’re playing around with in sound checks.”

The drummer also said that the band had been very pleased with the online reaction to ‘R U Mine?’ and in particular how people have responded to the song’s video, which you can see by scrolling down to the bottom of the page and clicking.

He said of this: “The idea was sometimes when were messing around driving we film ourselves singing stupid songs on the radio, people do that I think, and in a way we wanted to do a video we could put out straight away without any promotion which is what we did with ‘Brick By Brick’. We didn’t tell anybody we were releasing it, we just put it out. In a way, that worked better than any other video we’ve put out. And ‘R U Mine?’ more people have watched that than any other video on this album. So obviously it worked.”

Helders also spoke about how well the tour with The Black Keys was going and said that he and his bandmates had always been big fans of the ‘El Camino’ duo.

He added: “We’re really big fans of Black Keys, kind of always have been. It’s a great tour to be able to watch them as much as you want as well. We’ve never done a support tour so it’s quite a lot of excitement and fun to just go on for an hour and you’ve got the rest of your night to enjoy as well.”

Arctic Monkeys announced earlier this week that they will be releasing a brand new track titled ‘Electricity’ later this month.

The track will be released as the B-side to ‘R U Mine?’, which is to be re-released on limited edition purple vinyl as part of this year’s Record Store Day on April 21.