Monkeys are joined by surprise guest for their biggest UK show 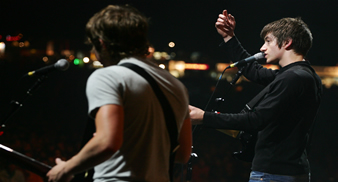 Alex Turner, Matt Helders, Jamie Cook and Nick O’Malley kicked off the show with a double-whammy of ‘The Sun Goes Down’ and ‘Brianstorm’.

Turner declared that “this is terrific, I think” before telling the audience that they had “Never been to Glastonbury, us four. So it’s a double celebration!”

After dedicating ‘Fake Tales Of San Francisco’ to a Norwegian fan in the audience, They they live debuted ‘Temptation Greets You Like A Naughty Friend’ – the B-side from recent hit single ‘Brianstorm.’

Turner said: “We never played this live before, it’s a Glastonbury special not that Glastonbury isn’t special already,” – rapper Dizzee Rascal, who performed on the single came onstage to deliever his part.

Sound quality on the Pyramid Stage was quiet, and a lot of the audience were screaming out for the volume to be turned up.

“What are you saying, ‘louder’?” asked Turner. “I can’t tell if they’re happy or angry.”

Mass crowd sing-alongs to ‘Do Me A Favour’ and ‘Leave Before The Lights Come On’ brought the set to a close.

The crowd cheered so loudly at the end that Alex Turner rhetorically asked: “You liked that? Well ok, we’re just going to bring on an organ and then we’ll come back and play some more.”

Arctic Monkeys returned to the stage with ‘The View From The Afternoon’ before giving the fans a special surprise.

Turner announced gleefully: “We liked to play a cover for you, like we said it only happens once, so we want to do something special for you, we’re thrilled to be here. Shirley Bassey is playing on Sunday, so this one is for Shirley.”

The band then played Bassey’s ’71 Bond theme ‘Diamonds Are Forever’ joined by their producer James Ford accopmpanying on organ..

Returning the crowd’s earlier thumbs up the band thanked the crowd before playing closer ‘A Certain Romance’.

‘The Sun Goes Down’
‘Brianstorm’
‘Still Take You Home’
‘Dancing Shoes’
‘Ritz To The Rubble’
‘Teddy Picker’
‘This House Is A Circus’
‘Fake Tales Of San Francisco’
‘Balaclava’
‘Temptation Greets You Like A Naughty Friend’
‘Old Yellow Bricks’
‘I Bet You Look Good On The Dancefloor’
‘If You Were There, Beware’
‘Flourescent Adolescent’
‘Mardy Bum’
‘Do Me A Favour’
‘Leave Before The Lights Come On’
‘The View From The Afternoon’
‘Diamonds Are Forever’
‘505’
‘A Certain Romance’


Check out the Uncut Festivals Blog here, we’re at Glastonbury and Knowsley Hall this weekendwww.uncut.co.uk/blog/index.php?blog=10&title=