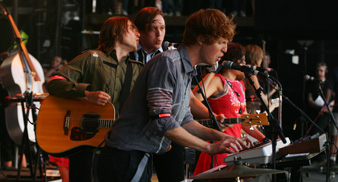 The night’s biggest winners were country pop act Lady Antebellum. The Nashville band took home five awards, including honours for Record of the Year and Song of the Year.

Arcade Fire, who were nominated for three awards, picked up the gong for Album Of The Year for ‘The Suburbs’ at the Los Angeles Staples Center ceremony.

The full list of winners from the Grammy Awards this year is: