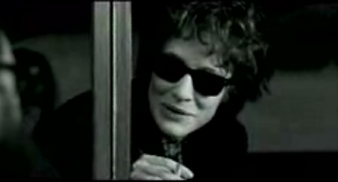 The Antony & The Johnson‘s version of the song appears on the soundtrack to the new Todd Hayne’s Dylan biopic ‘I’m Not There’ – alongside covers by Sonic Youth, Wilco’s Jeff Tweedy, Pearl Jam’s Eddie Vedder amongst many others.

Writing on his band’s official website, frontman Antony Hegarty says: “Todd Haynes‘ Bob Dylan movie is coming out in November. I did a cover of ‘Knockin’ on Heaven’s Door’ with Kevin Barker for it. We did it slow and minor. I had started singing it by myself when i was in Australia at the end of the tour in January 2006.

He adds: “Rob Moose was teaching me guitar and we bought a book of Dylan songs to learn, but then one day I guess I was just feeling really exhausted and deathy because I just started singing that song over and over, and I did it that night at the show.”