Alabama Shakes have said that Jack White and My Morning Jacket's Jim James would be their dream collaboration. Speaking to NME, singer Brittany Howard says the pair would be her ultimate jamming partners. She says: 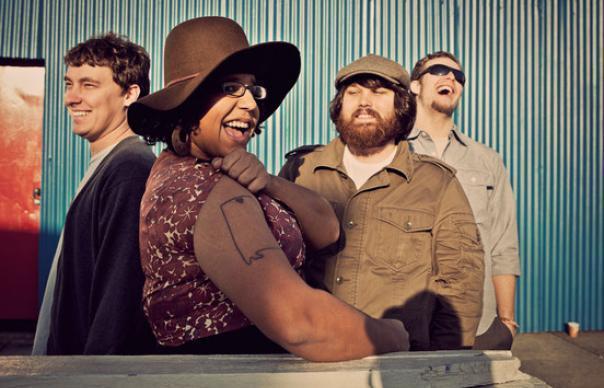 Alabama Shakes have said that Jack White and My Morning Jacket’s Jim James would be their dream collaboration.

Speaking to NME, singer Brittany Howard says the pair would be her ultimate jamming partners. She says:

“My dream collaboration would probably be Jim James and Jack White – all together and we’d just come up with some stuff. The way Jim James arranges his songs – that’s perfect. He’s already a great songwriter and then you throw Jack White in the mix and he’s got this crazy way he plays guitar, I just feel like we would all have a lot of ideas, it would kind of be endless.”

The band have previously worked with White, who asked them to play a gig at his Nashville record store to record a single for a new line of seven inches for his Third Man Records label. The band will also support White on tour this week.

Last week, Alabama Shakes told NME that their success is because they’ve focused on sincerity, rather than trying to be “original” or “different”.

Howard said: “A lot of people are like, ‘I want to be different, I want to be original, I want to be an electronic band that mixes this and this’, instead of just writing songs together as people and being sincere about it.”