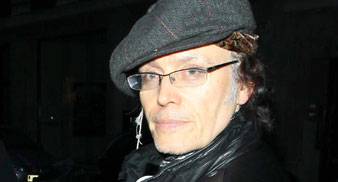 Adam Ant has said he is working on his first album in since 1994.

According to Ant, the album will be named ‘Adam Ant Is The Blueblack Hussar in Marrying The Gunner’s Daughter’. Speaking to [url=http://www.nme.com/news/adam–the-ants/50749]NME.COM[/url], he said that one song features “a member of Oasis co-writing”, though he declined to go into more details.

However, Ant did describe the album as a “kind of concept – a live record that lends itself to performance, but a very old fashioned, old school, step-by-step album”.

In addition, Ant said he has also recorded a song in tribute to his former manager Malcolm McLaren, who passed away earlier this month and was buried in London today (April 22).

The song, called ‘Who’s A Goofy Bunny Then?’, takes its name from an affectionate nickname given to McLaren by Ant – referring to his “quite prominent teeth”.

“Malcolm was a sort of mentor in my life” he explained. “As close as you can get to a surrogate father.”