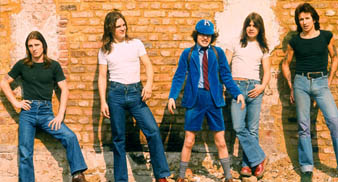 AC/DC are set to release a live DVD this spring.

‘AC/DC Live At River Plate’, out on May 9, features footage taken at the band’s three shows in Buenos Aires‘ River Plate Stadium in December 2009. They played to nearly 200,000 people over the three nights.

The release will also be available on Blu-Ray.

Last month the band said that they will be taking a lengthy break after the DVD comes out.

The tracklisting for ‘AC/DC Live At River Plate’ is:

‘Rock ‘N’ Roll Train’
‘Hell Ain’t A Bad Place To Be’
‘Back In Black’
‘Big Jack’
‘Dirty Deeds Done Dirt Cheap’
‘Shot Down In Flames’
‘Thunderstruck’
‘Black Ice’
‘The Jack’
‘Hells Bells’
‘Shoot To Thrill’
‘War Machine’
‘Dog Eat Dog’
‘You Shook Me All Night Long’
‘T.N.T.’
‘Whole Lotta Rosie’
‘Let There Be Rock’
‘Highway To Hell’
‘For Those About To Rock (We Salute You)’