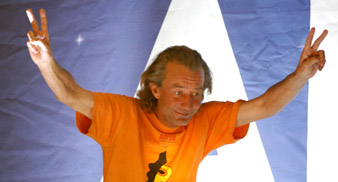 Ola Brunkert, ex-session drummer with legendary Swedish pop group ABBA was found dead in his garden with cuts to his neck on Sunday (March 16).

Police believe Brunkert fell through the window in his home and cut his neck in the fall. He then apparently tried to leave this house to get help but collapsed and died in his garden.

A neighbour found Brunkert, 62, who lived alone, at his home in Majorca late on Sunday, outside in a pool of blood.

A police spokeswoman had said that an autopsy is being carried out but that no foul play has been suspected.

“All indications point to an accidental death,” a spokesperson for the local authority in Majorca states.

Brunkert was the only session drummer to feature on every ABBA album. He played on “People need Love”, ABBA’s first single and their famous Eurovision Song Contest hit “Waterloo” amongst others.

ABBA’s Bjoern Ulvaeus remembers Brunkert as a “good friend” when they worked together in the mid-1970’s. “He was a very creative musician who contributed a lot when we toured and worked in the studio. He was one of the best,” Ulvaeus added.