Last week, the BFI hosted a Q&A session with director Richard Lester, as a prelude to the 50th anniversary re-release of A Hard Day’s Night. 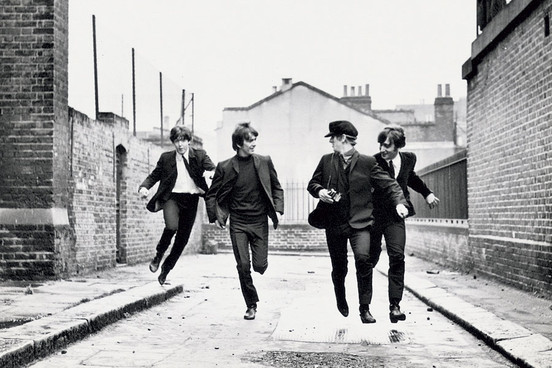 Last week, the BFI hosted a Q&A session with director Richard Lester, as a prelude to the 50th anniversary re-release of A Hard Day’s Night.

The BFI have kindly let us host the Q&A – which you can watch below. Lester, who’s 82 now, is in formidable form during the session with author Mark Lewisohn. Watching the film again now – brushed up for its birthday – it’s reassuring to see how much it still sparkles. As Lester points out, much of that is to do with the way he and screenwriter simply let The Beatles be themselves, albeit in slightly exaggerated form. Perhaps most conspicuous is how funny the film is. “How did you find America?” a journalist asks Lennon: “Turn left at Greenland,” he pings back.

It’s interested to see how similar the portrayal of the band in A Hard Day’s Night is compared to the Albert and David Maysles’ documentary What’s Happening! The Beatles In The U.S.A, which offered a similarly freewheeling and candid snapshot of the band. As research for his script, Owen spent three days with the band in November 1963, three months before the Maysles’ filmed The Beatles’ first visit to America. The parity between the ‘reality’ created by Owen and director Richard Lester in A Hard Day’s Night is extraordinarily close to the band’s true lives as caught by the Maysles.

But of course, Lester’s film isn’t a documentary: part Marx Brothers slapstick, part Goons surrealism, part New Wave cinema, part satire on being The Beatles, it’s an incredibly multi-faceted piece, nowhere near as straightforward as it’s simple proposition and brisk pacing might suggest. There is some shenanigans with schoolgirls at the start, and Lennon’s ‘comedy German’ impressions in the bath (a Spike Milligan lift) inevitably appear slightly dubious in 2014. The scene where George Harrison teaches John Junkin how to shave using his reflection in the mirror is a brilliant piece of composition, predicated entirely on the location of the camera rather than what Harrison can really see of Junkin’s reflection. Fab gear, etc.

Incidentally, the interview with Richard Lester can also be watched on the BFI Player here.

A Hard Day’s Night runs at the BFI Southbank until July 17; you can find more details here. It will be released on DVD and Blu-ray on July 21