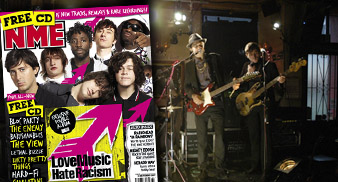 Uncut’s sister title NME has joined up with Love Music Hate Racism to release a free anti-racism double album – the first disc of which comes free with this week’s issue of the paper.

The Love Music Hate Racism project was created following reports that the British National Party were attempting to recruit school students to their notorious campaign by handing out racist music CDs. The LMHR album aims to reverse the trend with it’s positive anti-racist message from the artists involved.

Other artists that feature on the double album include Hard-Fi, Carbon/Silicon, Manu Chao, Billy Bragg, Biffy Clyro and The Charlatans.

There are a further 14 tracks available to download free at NME.com

The full track list for LMHR disc one is as follows: