It's a busy week for film. Marvel Comics' superhero team-up Avengers Assemble arrived in cinemas last night, while yesterday the inaugural three-day Sundance London Festival opened for business at the 02 Arena with a screening Under African Skies, a documentary about the making of Paul Simon's Graceland album. 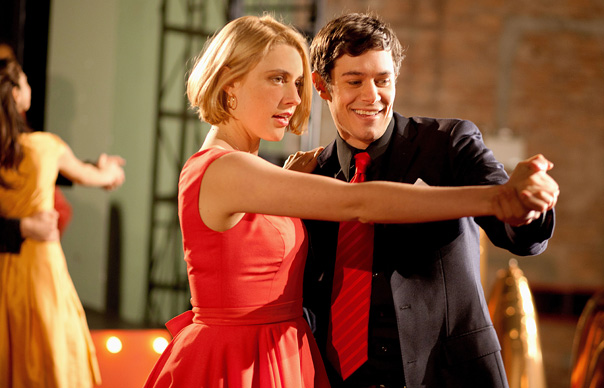 It’s a busy week for film. Marvel Comics’ superhero team-up Avengers Assemble arrived in cinemas last night, while yesterday the inaugural three-day Sundance London Festival opened for business at the 02 Arena with a screening Under African Skies, a documentary about the making of Paul Simon‘s Graceland album.

In all the attendant coverage these two events have received, it would easy to overlook another prestigious release – the release of Damsels In Distress, the first film in 14 years from writer/director Whit Stillman. Stillman’s debut, 1989’s Metropolitan, premiered at Sundance and went on to earn Stillman an Oscar nomination for Best Screenplay, establishing Stillman as a kind of WASPy Woody Allen. Invariably in Stillman’s films, there’s lots of wealthy, super-literate, young Manhattanites standing around in rooms, talking. Although Stillman’s body of work is slight – only four films, including Damsels – it’s still significant. You can spot his influence in the droll screenplays of Wes Anderson and Noah Baumbach, the preppy vibes of the first Vampire Weekend album, or The Social Network’s precocious Ivy Leaguers.

Despite Stillman’s lengthy hiatus – he’s been living in Paris, incidentally, working as a writer for hire – Damsels In Distress demonstrates that his chops are reassuringly intact. I’m hard pressed to think of another filmmaker who so unapologetically mixes references to the works of obscure British novelists with lengthy discussions on “the decline of decadence” and the unusual sexual proclivities of a 12th century religious order – and still finds time to work in a dance sequence modeled on a 1937 Fred Astaire musical called, uh, A Damsel In Distress.

Unlike Stillman’s previous dispatches from the drawing rooms of the Upper East Side, the setting here is a fictional university campus though, typically, the focus is on young, hyper-privileged Americans. Damsels… follows four female students (led by Greta Gerwig, who did such good work in Greenberg opposite Ben Stiller) who run the university suicide prevention centre, prescribing tap dancing as a remedy for depression, and who plan to save their fellow students from becoming part of the college’s “moron jamboree” via the miraculous powers of soap. The vibe is idiosyncratic, digressive; the script zips along like a Howard Hawks’ screwball comedy. As high school comedies go, it’s up there with Heathers and Clueless.