Not dark yet: Hiss Golden Messenger's anthems of hope for troubled days, reviewed. Plus an extensive MC Taylor Q&A 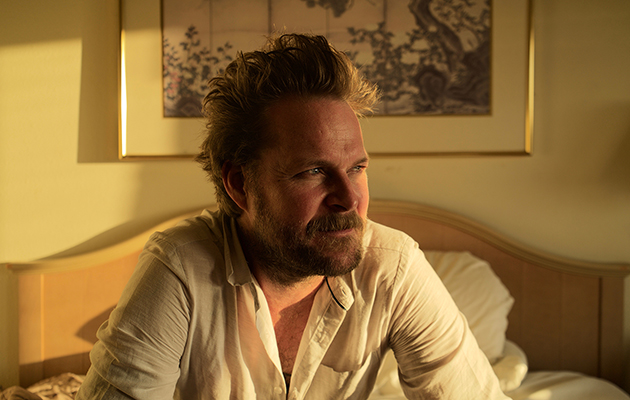 In times like these, it is easy to see everything as political. A letter in last month’s Uncut complained about what the writer perceived as the “anti-Trump sentiment that is threaded across one issue to the next – little jabs sprinkled in album reviews and articles.” Just over half a year into Trump’s presidency, however, how can artists – so many of them, as our correspondent noted disparagingly, “progressive” – articulate themselves without acknowledging that their music now exists in a changed world?

Hallelujah Anyhow, the eighth album by MC Taylor and Hiss Golden Messenger, is a product of that world, but it features no overt references to our political realities. Instead of a specific language of protest and indictment, the lyric sheet is home to 17 uses of either “darkness” or “darker” (more even than in an old issue of Uncut). Stormclouds gather, repeatedly; a harder rain is forecast to fall. Critically, though, the encroaching threats are rebuked on almost every occasion, so that the album becomes a testament of metaphysical defiance, a lucid and hard-earned declaration of hope in troubling times. “I’ve never been afraid of the darkness/It’s just a different kind of light,” Taylor sings in the opening “Jenny Of The Roses”, a gorgeous half-sibling to “What’s So Funny ‘Bout Peace, Love And Understanding” where the rage is replaced with empathy. Ten songs later, he is still rigorously on message. “Step back, Jack, from the darkness,” runs the refrain of “When The Wall Comes Down”. “But while I’m here I’m gonna sing just like a songbird.”

Hiss Golden Messenger’s albums have long provided uplift and consolation, even when their ostensible subject matter was doubt, and sometimes crisis. Hallelujah Anyhow, recorded with trusted accomplices over a week this summer, asserts Taylor’s values with a new urgency and pithiness. It describes a quest in which he confronts the unnamed iniquities of 2017 and discovers, once again, the tools with which to spiritually repel them. There is love, an enduring belief that people are better than this, and an understanding that music shared – with listeners, and with a tight North Carolinan community of players – can have a profound transformative impact.

That music, as followers of the band will already know, is not exactly revolutionary. “As I see it, I make traditional music,” Taylor told me recently. “And I understand tradition to be the most radical blending of emotion and art and intention, otherworldly fullness of spirit. I invent things out of thin air, but I’m guided by spirits that came before me.” As with 2016’s Heart Like A Levee, Hallelujah Anyhow sounds like the work of musicians who understand roots music and the southern vernacular in both erudite and intuitive ways. The general pace is a little more charged this time round, with drummer Darren Jessee driving a spry, Heartbreakers-ish groove, but the vibes remain broadly consistent. There are punchy new anthems in the vein of “Tell Her I’m Just Dancing”, “Red Rose Nantahala” and “Call Him Daylight” (“Lost In The Darkness”, “I Am The Song”) and, in “Harder Rain”, a wholly successful take on deep country-soul. Van Morrison is once again a discreet and uncharacteristically benign presence throughout, with references to “Caledonia”, “Domino”, and the “Star Of The County Down” dispersed among the lyrics.

Taylor has also channelled Ronnie Lane in the past (most notably on 2014’s “Saturday’s Song”), but it’s a Faces influence that comes to the fore on “Domino (Time Will Tell)”. The most vamping gospel rocker Hiss have ever attempted, it finds Taylor looking back on 25 years on the road and unearthing sentimental epiphanies – the “Old SGs and cigarette smoke” of ancient history – hidden in the grime of the touring circuit. Hallelujah Anyhow may have been recorded swiftly, but the abandonment is still exquisitely detailed, as every listen to “Domino” reveals further nuance beneath the swagger: unshowy virtuosity from the horn section and the backing singers; a couple of pumping piano lines from Phil Cook, whose playing is consistently looser and funkier than ever. Cook also contributes a slide solo at the end of the song, ethereal enough to subvert any macho thrust, but not to undermine the prevailing euphoria.

As ever, the jams could go on longer, and “John The Gun” (fleshed out from the acoustic version on Heart Like A Levee’s undervalued companion album, Vestapol) ends with a particularly cruel fade in the middle of Michael Lewis’ sax solo. But part of Hallelujah Anyhow’s power comes from its economy and immediacy. Increasingly, as his discography grows, it feels like Taylor isn’t gunning for a definitive album so much as a series of heartfelt dispatches that add up to a greater whole. From the outside, it can look as if he’s seizing his moment of relative success as keenly and decisively as he can. But perhaps a more noble strategy is in play – that of a working singer-songwriter whose belief in the social usefulness of music is such that a rapid emotional response, expressed in universal terms, is a kind of professional obligation. It’s a tough but, one assumes, a rewarding job, and we should be grateful that Taylor is ready to meet its challenges with such vigour. “If it’s up to me,” as he sings in “Harder Rain”, “A little love would go a long way.”