J Mascis tals to Uncut about the Dinosaur Jr reunion, and the new album, due out later this year 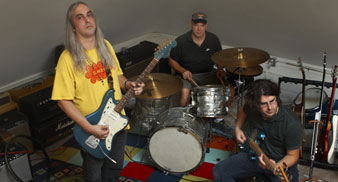 J MASCIS talks (very slowly) about reforming the original line-up of DINOSAUR JNR with bassist Lou Barlow and drummer Murph and their new album, due later this year.

UNCUT: It’s nearly 20 years since Bug. How’s the dynamic changed between you, Lou and Murph?
MASCIS: It’s different. Bug was pretty bad energy. We relate to each other differently now. Lou never used to talk before, now he talks.

Why did you decide to make a new album?
If we were going to keep playing, we were going to get sick of playing the songs. So we decided maybe we should record some new stuff. I mean, historically, most bands I can think of, it’s never been that good if they do a new album 20 years later. We’ll see. I guess it’s an individual thing, everyone will have to judge for themselves. But I hope it’ll be good.

Were you expecting the response you got?
I wasn’t expecting that level of enthusiasm that greeted us. It was kind of an experiment, just to see what would happens. It seemed to be going pretty well, so we just kept doing it.

Do you see this as a long-term plan?
We thought we could play some more shows then we thought we should have some new songs. Either it’ll stay the same, get better, get worse, but it just seems a step we have to take for the next thing to happen, for it to keep going or for it to end. It just seems like: We might as well do this happen and see what happens.

What can we expect?
There’s some loud guitar.

Do you worry that this record will be compared with Bug?
It’s fine, I don’t care if these songs are judged against Bug.