Super Furry Animals bassist Guto Price on the band’s new album, due in May. 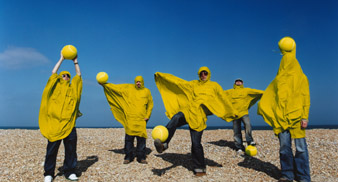 UNCUT: How you doing, are you alright?
GUTO: Yeah, not bad.

Do you know what it’s called yet?
No. It’s not called no, it’s just ‘No I don’t know’ just to clarify.

Anything in the offing?
We always have about 10 possible titles and we see which one annoys us the least, and then pick it. We don’t often have titles before we’re in the studio. Wings Around The World we had, but mostly it tends to be last thing.

Where did you record it?
We recorded it in the South of France. In a vineyard, so we were very much involved in the wine world as well as the music world.

Who produced it for you?
A guy called Dave newfield, who’s probably most famous for Broken Social Scene, he came over from Canada and recorded it with us.

Is that an indication of the sort of stuff you’ve been listening to prior to recording?
No. The songs we chose were pretty much guitar-based. I wrote songs that could be recorded fairly live in the studio. Theirs was a record we liked the sound of.

Are you all writing now? Because I know Lovecraft was more a collaborative album.
Yeah, songs came from all directions really. You know, we’ve always got tunes but yeah Scott and Kian, Kian’s got a song. We’re all pretty involved.

Are there any good song titles?
Yeah, there’s one called ‘Neo-consumer’ which is a title I like. There’s a song called ‘Battersea Odyssey’ which is inspired by the power station. ‘Wolves’ as in the animal, not the football team.

You say it’s a guitar record, how would you describe it?
It’s really rowdy and it’s upbeat.

Is there anything you’d compare it to in your back catalogue?
Tricky really, I hope not, because we’re always trying to move forward. But it’s a lot of Eastern European instruments like a… that’s the one on Get Carter, that sort of starry sound. And we’ve got an instrument called a saz from when we were in turkey last year.

What does that sound like?
That’s kind of like a Ballalica sort of vibe, we’ve been listening to a lot of seventies Turkish music. That’s kind of subtly influenced us. We never make a record geographically, we take instruments from all over the world and blend them all together.

Are there any kind of great surprises in store for us?
People might be surprised how ‘rock’ it is, actually.

By ‘rock’ do you mean in a Guns N’ Roses sense or in a Metallica sense. ?
I mean more Black Sabbath, you know, there’s no tight trousers in this band we’re still loose fit, and there’s no bandanas. They look good on other people, but never myself.

And you tend to need some sort of handlebar moustache to go with them…
You do, and the charisma to carry it off. You know, people who wear a bandana obviously don’t give a shit about anything, and that’s really cool.

Is there anything that you’re particularly proud of about the album?
Just the energy of the whole record, it is really quite, vibey. It’s a sort of party record. It’s so difficult to try and put it across because other people haven’t heard it and it’s usually other people who can say what it’s like more than I can. We’re really excited about it, it’s definitely different but still it’s the same band and I don’t think we’re treading old ground, for us at anyway. We’ve got a new bunch of influences like Turkish prog. rock. There’s even like a groovy Motown influence in it, not that it’s a motown record, just the way they make those records, live in the room. The band playing on their own getting a groove going, you know, quite a dirty groove. It’s not a clean record.