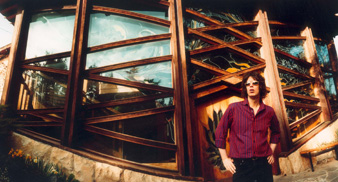 UNCUT: Do you have a title yet?
SCOTT: I’m still deciding on a title, I’m not absolutely certain yet. It’s most likely to be called Book Of Lightning.

Where did that come from?
Some corner in my head. [laughs]

When did you go in the studio to start work in it?
Began in early September, well I say that… most of it was recorded in early September in Basing Street Studios in London, or SARM West as it’s officially called. I think of it as a bit of history because it’s the old Island Record studio from the 60s and 70s, but I did record a track in Vancouver in June that is on the album.

How was it recording in Vancouver?
That was good fun. It was a band that covered one of my old songs and I loved what they did with it and I asked if they’d back me for a track, and so that’s how that happened.

So this is a Waterboys album, but who’s actually on there?
There’s me on everything. Bass player, got Mark Smith is the next most frequent contributor. Steve Wickham plays fiddle as usual. Richard Neiff plays keyboards and a couple of drummers – Brady Blade who’s a top American drummer, played with Steve Earle, Emmylou Harris, lots of people. And an English drummer called Jeremy Stacey.

When you’re working on material, do you think “This is going to be a solo record, or this is going to be a Waterboys record?”
Ah no, I think of them all as Waterboys records. It’s just that I went solo for a while in the mid-nineties, basically because I’d made an album on which I played all the instruments. Then I continued solo for a little while, didn’t like it, switched back to the Waterboys. So there’s no decisions to be made when I make a record these days, it’s just a Waterboys record the solo thing was [adopts cockney accent] just a phase, mate.

So what can we expect from this record?
It’s a broad canvas – its part psychedelic, part protest, there’s some personal songs, some relationship songs, all different. So I can’t sum it up.

With the protest songs, is that the world we live in at the moment?
Um, they’re to do with power and people becoming glamoured by power.

Universal Hall was the last studio album, which in itself was pretty different from A Rock in the Weary Land…
Absolutely.

So where are you going with this?
Well this is very different again, but as I say, it’s a broad canvas, a wide range of music. Some of it is electric and psychedelic; some of it is based around acoustic guitar, fiddles, keyboards and drums – a more pure sound.

Could you put it in relation to past Waterboys albums?
I’m glad to say I don’t think it sounds like any of the older records, although there are two songs that were written at the Fisherman’s Blues period that I never recorded, so they have echoes of that sound.

What made you want to go back to those songs?
I’ve written songs for a long time and I have a book full of all the ones I’ve never used. Every time I make a record I go back through that book and see if there are any that fit with the mood of whatever the new style is, or the new theme is.

What are they called?
There’s “You In The Sky” and “Everybody Takes A Tumble”…I’m like Roger the Dodger with his dodge books – do you remember in the Beano, he used to have this shelf with all his dodge books and I’ve got songbooks of all my old songs that I’ve never used [laughs]

How many books are there?
I’ve got seven or eight books up there, I’m sure there’s some overlaps, but yeah loads of them. I use these big black…I suppose they’re for artists or for sketchers, you buy them in art shops. Massive, black books that I use.

Are you gonna be touring the record?
Yeah, beginning in March when the record comes out.

What’s the release date?
Well I’m told it’s March the 6th …I’ve never had a release date in my life that’s been held to but maybe we’ll make it this time. I’ve delivered the album on time anyway and it’s on a new label for us – (Where’s 14?), which is part of Universal.