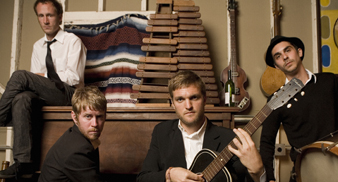 UNCUT: What were the things that you were listening to that were hitting you for the album?

JONNIE RUSSELL: There’s definitely a lot of variety of things that I think we were listening to as a band. When we first came together and started playing a couple of years ago there are certain albums we were listening to at the time. A lot of Tom Waits records, Bone Machine and records like that which were seminal records for us. At the same time we were listening to things like Sam Cooke and Nina Simone. Rock music too, from the Velvet Underground to The Modern Lovers. I think we have a lot of reference points and they’re the high points.

UNCUT: So how can we expect all that to work into the album?
JR: (haha) I’m not sure, I’m not sure how much of those are actually soundalised in there, or kind of conceptionally or stylistically factored in there. I think there’s a little bit of everything there if you listen hard enough.

UNCUT: What can we expect from the album then?
JR: It’s twelve songs, all of which kind of span the year and a half of our songwriting. There’s a good amount of variety from guitars, rock or blues tunes to some slower, more piano driven songs and some drums and blues kind of prison chants.

UNCUT: Do you have a favourite?
JR: I don’t think so.

UNCUT: What went on in SXSW because you got into quite a bit of a bidding war going on?
JR: I think SXSW was probably the beginning to our exposure to the music industry in a more broad sense. Some of the people we spent time with were different labels that were based in LA. The most surprising thing was the interest from over here (UK). It was a really good chance to meet really good people from here in the UK which eventually led to a trip a few months ago to meet some of these people, labels and see them on their own turf. That was probably the most eye-opening experience, being opened up to the industry at large.

UNCUT:; Did your experiences at SXSW check in with your opinion of the music industry?
JR: I think it in some way coloured it in differently [than] if we’d had experience of being in a band for 15 years. I think it gave us a unique crash-course in it as far as the way people work and sell themselves. It was a really bizarre thing that all of a sudden they’re talking about some songs that you wrote in your basement. It’s a very bizarre to learn those things.

UNCUT: What’s the best thing about being Cold War Kids at the moment?
JR: That’s the easiest question you’ve asked yet. Getting to wake up in London and walk round the streets and get a coffee because people want to hear our songs over here. That’s like the biggest honour you can imagine, getting over to Europe. None of us ever thought we would, to be here and playing music and not spending your life savings is the best thing in the world about being in a band.