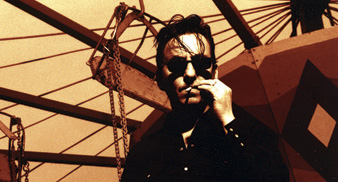 Former Pulp member and now acclaimed solo artist, Richard Hawley has a new album, his sixth, ‘Truelove’s Gutter’ out on Mute on September 21.

RICHARD HAWLEY: I’d have to say Jarvis is the most fun and also the most difficult, in terms of being challenging. Fun and art don’t often go together too well, a bit like wanking and crying at the same time. But somehow it works with Jarvis. Besides, Jarvis is the person I work with the most often, so if I didn’t say him he’d probably deck me. Seriously, he’s become one of my most trusted comrades in arms.

UNCUT: If you were an inmate in Guantánamo Bay, what song, played on a loop, would have you begging for mercy?

RICHARD HAWLEY:, Ah, that’s easy. See, I had a Guantánamo Bay situation. Years ago I took a job in HMV and they played a looped tape of Stock Aitken & Waterman songs for a solid nine weeks. No-one was allowed to change the tape. One day this rep came in from a hip hop label and I put on this seven-inch rap single, just for one song, and the manager slammed me up against the wall and said if I ever even thought about doing that again I was sacked.

UNCUT: If you were reincarnated would you rather come back as a man or a woman?

RICHARD HAWLEY:I gotta say I really like being a bloke. Women definitely have a steadying influence on rock’n’roll. Just look at Pulp; Candida [Doyle, Pulp keyboardist] stopped them turning into a rugby team. Thinking about it, I actually have mostly female friends. So maybe I’d give it a go. Yeah, why not, I’d come back as a woman.

UNCUT:You used to have a reputation as an astonishingly prolific user of Class A drugs, then overnight you gave them all up. Why?

RICHARD HAWLEY: Well, I still drink and smoke, but yes, I did give up all other drugs. See, like a lot of dedicated drug users, I used to find myself in situations that normal people with real lives never find themselves in. For instance, discussing hi-hats with some drummer at 4:30 in the morning. Situations that are way beyond tedious.

It’s like your whole life has been reduced to hanging around some hellish launderette. And drugs were also killing me, it was a serious addiction. I took a long look at my life and asked the question, “What is so wrong that I have to do this?” I have three kids, I didn’t want them growing up with a junkie for a dad. Or a dead dad. But apart from extending my life it has also dramatically reduced the amount of arseholes in it.

There is one band who shall remain nameless who, every time they turned up in Sheffield, would be on the phone, saying, ‘All right, Hawley, got any drugs?’ When I gave up, overnight, I got rid of a vast, steaming pile of shitheads. The second these wankers, who I thought were my mates, found out I wasn’t doing drugs any more, they disappeared. The phone just stopped ringing. Which is fucking fine by me.

See the full Richard Hawley interview and what else is in the Beatles Special September issue of Uncut magazine – On sale now!