The singer answers this month's 'Audience With' mailbag... 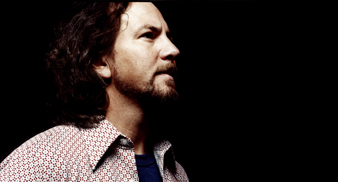 Pearl Jam frontman Eddie Vedder attracts curiously obsessive fans. Uncut’s mailbag for this Audience With… feature far outstrips any other we’ve done, and not all of them in the “When are you next playing Portugal?” category.

“Why didn’t you turn up to our wedding last year?” asks one slightly hurt fan from Ohio. “And would you and the band like to come and play at our first anniversary?” There are other invitations to weddings in Colombia, christenings in Denmark, safaris in South Africa and surfing holidays in Western Australia.

Here, though, Eddie Vedder answers your questions! For the full article, and to see if your question was answered, see the September issue of Uncut magazine, in shops now.

UNCUT: What were your inspirations when you wrote the soundtrack to Sean Penn’s Into The Wild? (Irene Mariani, Italy)

EDDIE VEDDER:When I was 12, I remember seeing the movie, Harold And Maude, a film that is accompanied by several Cat Stevens songs. Cat’s voice represents the interior voice of the character throughout the movie, and he does it absolutely perfectly.

It’s a perfect synergy between film and music, and it really inspired me to try writing for film. Take the final scene, where it looks like Harold is going to drive off the cliff, with the rain hitting the windshield, and you know how he feels. Suddenly they play “Trouble” by Cat Stevens, and it’s utterly overwhelming, heartbreaking. So seeing it work there made me think I could give it a go.

UNCUT: What was Nusrat Fateh Ali Khan like to work with? (Zak, Leytonstone, London)

EDDIE VEDDER: Well, it was intimidating on many levels. We worked together for a few days – we were put together by Tim Robbins for the Dead Man Walking soundtrack – and everything had to go through an interpreter because I was told he didn’t really speak English. He was very centred, like a Buddhist statue in many ways and he looked like he was made of stone! And when he sang, it was like he was channelling something incredibly powerful and spiritual.

After two days of talking through the interpreter, we were left in the room alone, and he looked at me and said, in perfect English: “You have a very nice voice.” And it was like that scene in One Flew Over The Cuckoo’s Nest, where the Indian guy finally talks to Jack Nicholson. I thought, you son of a bitch!

UNCUT: Is there one book that you have read that has been life-changing for you? (Jennifer Coppertino, New York)

EDDIE VEDDER: One that jumps to mind is Cat’s Cradle by Kurt Vonnegut. He talks about being a humanist, about it being a little different from being an atheist, which had a profound effect on me. I ended up reading pretty much everything he wrote after that, two, three, four, five times.

The only other author who’s had a similar effect has been Charles Bukowski, who opens your eyes to the fact that there’s beauty in everybody’s life. The life of someone on the lowest rung of the ladder is as colourful and meaningful, if not more, as some character in an F Scott Fitzgerald novel. So it makes you realise that we are all individuals and we all have something going on that is worthy of introspection and respect.

EDDIE VEDDER: You don’t remember? We all went around the back to that little pub in Wembley. Most of us had two drinks! Hell, I’ve still got the receipts, Thomas. Oh shucks, I paid cash. Oh well. But it was a great night, Thomas, pity you couldn’t make it…

See the full Eddie Vedder interview and what else is in the Beatles Special, September issue of Uncut magazine – On sale now!