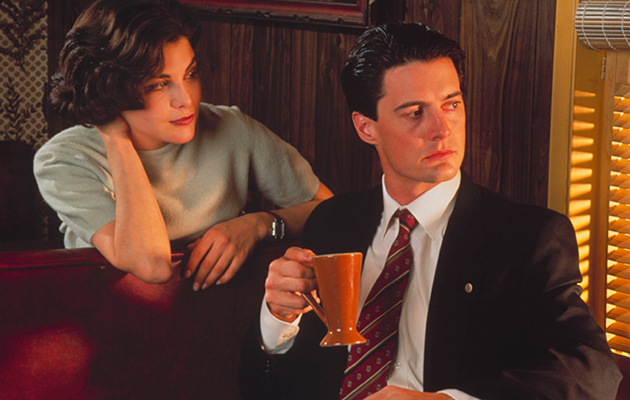 KINNY LANDRUM (keyboards, sampler): “Falling” as a song was completed sometime in the Floating… sessions, which were something like summertime of ’89.

BADALAMENTI: There was nothing pristine about Excalibur Sound, but it was a fantastic place to work. Artie Polhemus, the owner of the studio, was the very best engineer, not only with recording but also with mixing and editing. I had some of the best jazz-oriented musicians in town. They could play anything. Kinny Landrum was a top-notch musician, and I had Vinnie Bell on guitar, who had some of the most unique electronic sounds of the day. On saxophone, Al Regni – we went to Eastman School Of Music together and he’s still my good friend today. Grady Tate is one of the best jazz drummers, I might even say, of all time – he played on virtually everything on Twin Peaks. He had a great sense of humour: once he said, “Every time I do an Angelo and David session, I play in two tempos, slow and reverse.” David thinks music can be so much more beautiful if it’s played slower. Even when I started composing “Laura Palmer’s Theme”, David said, “Oh, Angelo, that’s beautiful, but play it slower, slower…” My God, I really felt like I was playing in reverse! But that, to David, is beautiful.

CRUISE: We recorded for almost a whole year. I was so scared with each new song. We had already set keys for every song, and they’re rather low. But because I brought the head voice in, it sounds higher. First we’d get the main vocal down, then I would sing it again and the second part would be a little softer, and less consonanty, then the third would be barely any consonants at all. I went home with a demo tape every day and thought, ‘This is awful work I’m doing, I sound terrible. The music is so great, but I’m not living up to it.’ So I decided I had no choice but to be myself and show that intimate, quiet beauty that is inside. It just came to life with the musicians, and making it a whole [in the mixes].

LANDRUM: We’d usually work from lead sheets, which had a melody and chords underneath, and we’d do what we thought was right for that particular piece of music. On “Falling”, Grady played some brushes on the cymbal and maybe a little bass drum, then it’s just me and Julee. Angelo may have played, but generally I played the stuff. The electric piano was done with a Yamaha DX7. The strings were generally a combination of a Roland D-550 and a Prophet T8. Angelo loved those ninth-chord suspensions, so the string parts are moving all the time.

BADALAMENTI: The ’50s is David’s world, or at least his world for the projects that he was doing. I’d heard those songs and I knew them, but at that time I was more into the jazz world, hipper things. Certainly, he had a passion for the ’50s, and it complemented his vision because of the mood of that music and of that period.

LANDRUM: When we were doing “Falling”, David says, “You got something that will sound ’50s?” I thought about the obvious things, like triplets in the upper part of the piano, but it didn’t seem right to me. Although the song had low notes in it, it didn’t have a bass part per se. So I said, “I’ve got this twangy Duane Eddy sound on my Emulator II [sampler] – what if I pitch that down in the bass register and play a bass part?” David said, “Let me hear it.” So I added a little amplitude modulation – what you’d call tremolo if it was on a guitar amp – and played ‘bom, bom-bom’, and David said, “That’s it, put it down.” I think it was one take. Floating… was recorded in summer 1989, and then the rest of the music for Twin Peaks was done in early 1990, before the pilot premiered in April. It was a little hectic.

BADALAMENTI: We recorded on two-inch tape, 16-track, and we separated every element. Not only did I get a final mix of what that cue was gonna be, but I did mixes of different variations from that, whether you’ve got a mix of just drums and bass, or drums and bass and vibraphone, etcetera. So you’re giving the editor of the film all sorts of variations on your major themes. If you watch Twin Peaks, there are so many variations on “Laura Palmer’s Theme” and the main title theme, and “Audrey’s Dance”. Every time those characters came back, David wanted to use some motif related to that.

LANDRUM: The very first thing we recorded for the TV show was “Laura Palmer’s Theme”. David was there for that session, and we recorded it in one afternoon. I remember doing overdubs to make “Falling” instrumental – they were done by me overdubbing a French horn part to play the melody on my Emulator II. I remember that because Angelo himself was a French horn player when he went to Eastman, but so was Julee Cruise, which surprised the heck out of me. But neither one of them had their chops up – French horn is one of the harder brass instruments to play, and if you haven’t played it in years, you can’t just pick it up and play it. Maybe we added some more strings, but I think that’s all we did to turn “Falling” into the Twin Peaks theme.