Trans: The return of Bernard Butler and Jackie McKeown

A few weeks ago, an EP turned up from the Rough Trade label, credited to a band called Trans (I’ve included some tracks below). Information was sketchy, at best: among the gnomic statements of intent on the press release, the most concrete were probably “Hard-panned stereo”, “Glasgow left/London right”, “celebrate good times” and, most pointedly, “MESSAGE: OBLIQUE”. 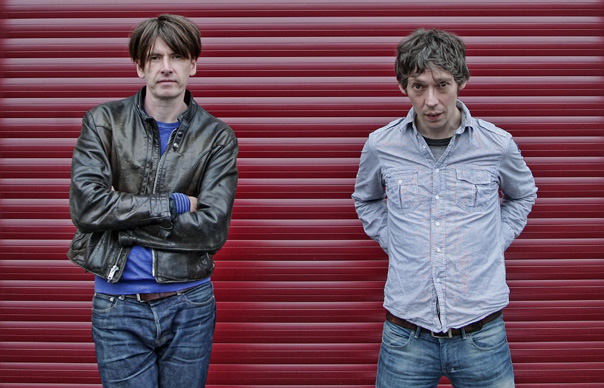 A few weeks ago, an EP turned up from the Rough Trade label, credited to a band called Trans (I’ve included some tracks below). Information was sketchy, at best: among the gnomic statements of intent on the press release, the most concrete were probably “Hard-panned stereo”, “Glasgow left/London right”, “celebrate good times” and, most pointedly, “MESSAGE: OBLIQUE”.

More edifying, perhaps, were the four tracks that made up the “Trans Red” EP: rubbery, linear jams that operated in a space somewhere between Neu! And Television, occasionally punctuated by vocals that were either yelping, quotemarks rock’n’roll (Bobby Gillespie would be an unflattering comparison, but stick with me here) or else hushed, understated for maximum contrast.

One other good reference point suggested by a colleague was that the first vocalist recalled a Scottish band from a few years back, The 1990s, who were on Rough Trade and who mastered a kind of arch, snarky take on CBGB punk to unfortunately little success. After a bit of internet research that inadvertently lead to some interesting places, it transpired that, while Trans weren’t being exactly forthcoming about their identities, they weren’t completely obscuring them, either.

Half of Trans – the “Glasgow left” channel – actually is Jackie McKeown, frontman of the 1990s. More unexpectedly, “London right” is occupied by Bernard Butler; guitar master, songwriter and producer for hire, Suede refusenik, and a man whose virtuosity has usually been channelled into more conventional melodic parameters.

The playing on the four Trans tracks is skinny, quicksilver, following a narrow motoric pathway, and wholly unrecognisable as the work of Butler, whose playing – while undoubtedly flexible – has historically been more fulsome (one of the many great pleasures of early Suede was that such a shy man could play guitar in such a florid and emotionally saturated way).

After presumably doing rather well out of his involvement with the first Duffy album a few years back, Butler has taken an eccentric path through 2013 thus far, moving from work with Texas, of all people, through production shifts for a bunch of newish indie bands, up to the current burst of Trans activity which has encompassed, in the last fortnight, a show at the Liverpool Psych Festival, and a couple of gigs at London’s cosy Shacklewell Arms (a place whose hipness never ceases to amuse me, since when I lived a few yards away it was the focal point for activities which sometimes resulted in the entire road being cordoned off of a Sunday morning). The second one found Trans backing the irrepressibly fearless Damo Suzuki, which should have tested their new improvisational imperative to the utmost. Wish I’d gone.

Anyhow, one of my jobs this afternoon is to edit an interview with Butler and McKeown for next month’s Uncut, in which they reveal that there’s another 30 hours’ worth of jams where these four came from. It’s a determinedly low-key project but, at a time when plenty of Butler’s contemporaries are opting for pragmatic career manoeuvres rather than adventurous ones, it seems a quietly heroic one, too. See what you think…