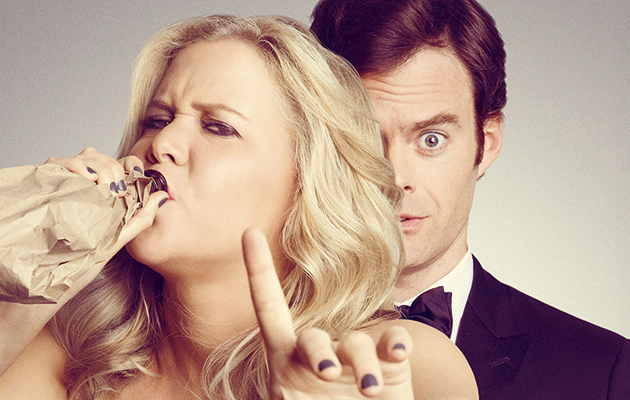 These days, Judd Apatow is a not just a multi-millionaire filmmaker but also a benign godfather, overseeing other projects by a sprawling ‘family’ of loosely connected comedians. Evidently keen to keep things on a casual footing, Apatow is also “the guy”. As in: “From the guy who brought you Bridesmaids”, as he is credited on the poster for Trainwreck. Although Apatow directed Trainwreck, it’s a shame that the name of the film’s writer and star, Amy Schumer, is absent.

Schumer is the creator and star of Inside Amy Schumer, a successful American sketch comedy that is widely tipped to storm this year’s Emmy awards. In Trainwreck, she plays Amy Townshend; a heavy drinker who enjoys a succession of one-night stands (“Never, ever let them sleep over”). “Don’t judge me, fuckers,” she says early on in voiceover.

By day, Amy is a writer for S’Nuff magazine, brainstorming features like ‘Ugliest Celebrity Kids Under 6’ and ‘Does Garlic Make Semen Taste Different’. The first 30 minutes of the film have a funny, foul-mouthed swagger; props especially to Tilda Swinton as Amy’s editor, swathed in toxic orange spray-tan and barking at her staff in flat Estuary vowels. Amy is commissioned to write a sports piece, where she meets a sports surgeon, played by Bill Hader and his Concerned Eyebrows.

Gradually, the com is replaced by the rom and what began as a frank and smart exploration of modern sexual politics winds up as a more conventional piece. Hader is good, incidentally; maintaining a good balance between awkward and low-key charm as the film moves towards an increasingly programmatic final act. Schumer is sharp and funny, though her edges are dulled by Apatow’s need for comforting resolutions, where emotional maturity, domesticity and group hugs win the day.

Incidentally, Schumer is not alone in having her name omitted from her own film’s poster. There were no credits on the Bridesmaids art for writers and stars Kristen Wiig, Annie Mumolo and Maya Rudolph. Thankfully, though, there was room for “The Producer Of Superbad, Knocked Up And The 40 Year Old Virgin”.