They start with the tropical strum of “Buenos Aires Beach”, from their debut album Wagonwheel Blues, whose balmy unfolding might strike you as an inappropriate opener for a chilly night in Camden, far from the sun-kissed climes the song so breezily evokes. 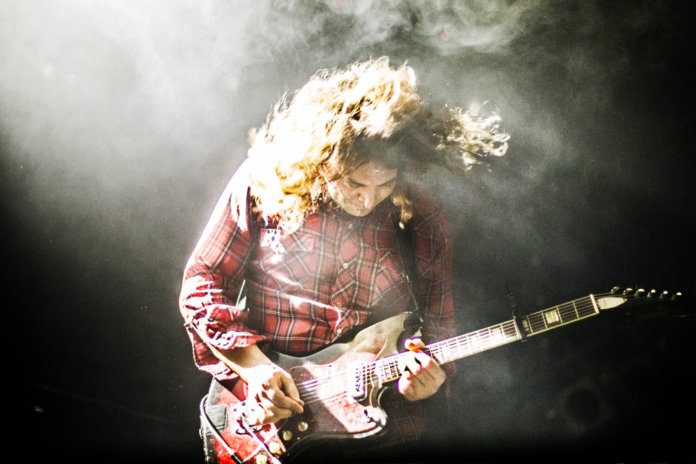 They start with the tropical strum of “Buenos Aires Beach”, from their debut album Wagonwheel Blues, whose balmy unfolding might strike you as an inappropriate opener for a chilly night in Camden, far from the sun-kissed climes the song so breezily evokes.

But while it’s true that outside it’s cold enough again to make you shiver, in here, the Electric Ballroom as packed as I’ve ever seen it, it’s hot enough to make you faint. The crowd’s collective body heat is something you could burn your fingers on. I can’t get my coat off quickly enough, but by the time I’ve got my arm out of a particularly uncooperative sleeve, The War On Drugs have already rousingly dispatched “Buenos Aires Beach” and launched headlong into a deliriously exciting version of “Baby Missiles”, from last year’s attention-grabbing Slave Ambient, a sensational cavalcade of sound.

It’s so breathtakingly essayed you hope they haven’t placed it too early in the set, a premature peak from which everything that follows will be a gradual descent. The opposite, of course, turns out to be very much the case. “Taking The Farm” was a brisk stomp on Wagonwheel Blues, bright and infectious. But it’s reinvented tonight as something much murkier, with a sucking undertow – only hinted at on record – that’s wholly reminiscent of the kind of vortex of noise John Cale brought to tracks on his Honi Soit album, like “Strange Times In Casablanca” or “Wilson Joliet”. It ends with the first of several completely mind-blowing jams, the increasingly charismatic Adam Granduciel hunched over a guitar he appears to be flaying alive, accompanied by a light show no less unhinged than the music we’re listening to.

A stately “I Was There” slows things down momentarily to an elegant, sultry stroll that’s in no hurry to get anywhere, Granduciel disinclined to rush it along, saving his energies for what will shortly follow. It’s about now that I’m surprised to hear mention of my own name in the introduction to nearly 20 minutes of sensational sonic displacement – “Your Love Is Calling My Name”, “The Animator” and “Come To The City”, played back to back, as they appear on Slave Ambient, a huge noise, like the Neil Young of “No Hidden Path” set to a walloping Moe Tucker backbeat. The entirety of the three-song sequence builds up the formidable momentum of an avalanche or something coming at you that will only be stopped by a well-placed bullet between the eyes or failing that a strategic air strike. There’s some good footage of all this that you can see here.

There’s something almost cleansing after this mayhem about the versions of “Best Night” and “Brothers” that follow. Granduciel’s guitar parts now have an amber glow, a startling clarity, lyrical and glistening. And now, here’s a surprise. Anything written about them to date is likely to cite the connections between War On Drugs and the so-called classic rock of Dylan, Springsteen and maybe Tom Petty, and also the architects of a different kind of noise, like My Bloody Valentine and Spiritualized. Less commented on perhaps is what they share with The Waterboys. It’s a connection made explicit tonight via a terrific version of “A Pagan Place”, with Granduciel’s impassioned vocal whoops appropriately reminiscent of Mike Scott, as they are on reflection elsewhere, punctuating a wild thrashing of acoustic guitars. There are actually only two of them being played, but the giant thrum they make sounds like the entire Red Army is up on stage strumming away with giddy abandon.

Their own “Arms Like Boulders” is no less grand. What an epic this has become, recalling at points tonight the version of “When The Night Comes Falling From The Sky” Dylan recorded with the E Street Band and then left off Empire Burlesque. Now they’re playing something that will turn into “It’s Your Destiny” and you can feel them holding themselves back as it starts, a gathering storm, that when it breaks is torrential. Which leaves only a climactic “Needle In Your Eye #16”, a swarming mass of drenching guitar feedback and the kind of scalding keyboards John Cale brought to the Velvets’ “Sister Ray” anchored by another unswerving motorik backbeat that like just about everything we’ve heard so far is sensational. More, and soon, is the response of everyone I speak to on the way out, those of them who aren’t still speechless, anyway.