When The Rolling Stones appeared here in 1969, they played on a stage so ultimately flimsy it afterwards could have been towed away on the back of a truck or broken down on the spot and sold for scrap. Unlike the Stones, it was not built to last. 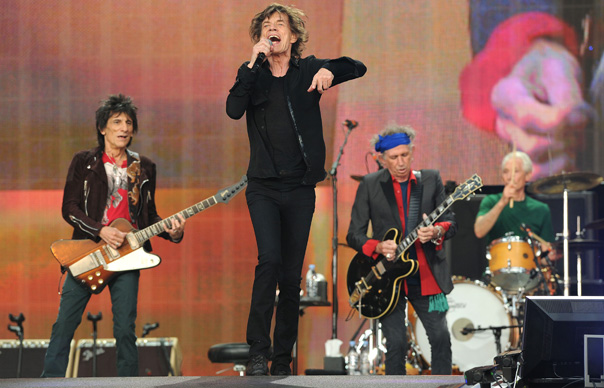 When The Rolling Stones appeared here in 1969, they played on a stage so ultimately flimsy it afterwards could have been towed away on the back of a truck or broken down on the spot and sold for scrap. Unlike the Stones, it was not built to last.

For what turns out to be a triumphant return to Hyde Park, the Stones have built a stage as big as Luxembourg flanked rather preposterously by two plastic oak trees, 70 feet high, whose many fake branches create a tangled leafy arch over the proscenium and twine around the lighting rigs, the whole gigantic edifice turning into a huge multi-sided video screen, a blazing cube that often displays multiple images of the Stones simultaneously, to increasingly dizzying effect, the band appearing in sometimes frightening detail. Whenever Keith Richards comes looming massively into view on one of the front-facing screens, it’s like watching Godzilla or something of that ilk lumbering out of a primeval murk to wreak havoc on the world.

In the show’s immediate build-up, the screens appear to become part of the parkland itself, huge magic mushrooms sprouting as “Let’s Spend The Night Together” booms over the PA, news footage of the 1969 concert now showing on the screens, a briefly nostalgic moment for those of us who were at the original show before the Stones bring us back into the moment with “Start Me Up”, a much better opener than the unhappy pairing last December at the O2 of “Get Off Of My Cloud” and “I Wanna Be Your Man”, even when as here it acts basically as a sound-check.

Over the course of four decades playing the largest venues available to them, the Stones have created an astonishing machine, of which they remain the most vulnerable part. Irrespective of the astonishing high-tech spectacle with which they surround themselves on tours that are planned like military campaigns, there is still something admirably fallible about them. You’d thing after so long doing this, they’d be so well-drilled there should be no off-moments to speak of, no dropped notes, miscues, fluffed lines, missed parts, fumbled climaxes. With the Stones, though, the potential for calamity seems always to lurk mischievously in the wings, which adds a welcome unpredictability to things.

Tonight, in fact, begins with something of an unexpected howler. I’m not sure whether Keith simply fluffs the intro to “Start Me Up” or there’s some technical glitch. Either way, his guitar sounds like a cat retching up a hairball or the engine of some old banger spluttering to wheezing life. It’s a quickly forgotten mishap, however, because the Stones are quickly into their imperial stride and everything that follows is essayed with raffish panache, the set loaded with what it’s really no exaggeration to describe as some of rock’s most immortal classics.

Highlights of the first 30 minutes include a wonderfully rowdy “It’s Only Rock’N’Roll”, with Keith suddenly on fire, a fantastically swaggering “Tumbling Dice”, a hard-driving “All Down The Line”, and best of all a wonderfully lithe “Beast Of Burden” that crackles with the same gnarly defiance and weathered obduracy that Keith later brings to a terrific version of “Before They Make Me Run”.

Lately, all kinds of people have been turning up as special guests at Stones shows, including recently Tom Waits and Arcade Fire’s Win Butler. Tonight the rather stolid young American blues guitarist Gary Clark Jr. is plucked from the afternoon’s largely undistinguished undercard and hauled out for a go at “Bitch” and seems merely to get in everyone’s way. No one really misses him when he goes, mainly because the Stones are already piling into a sensational “Paint It, Black”, hugely energised by Ronnie Wood’s serpentine guitar and Charlie Watt’s pummelling drums, a dark and mesmerising version.

Mick had started the show in a fetching gold brocade jacket. For “Honky Tonk Women” he appears in a kind of white smock that’s clearly designed to recall the infamous Mr Fish dress he wore in 1969 (he later puts on a jacket embroidered with butterflies, in another cute reference to the original show). This is the first of five songs played tonight that were also on the 1969 set list and it absolutely rocks, with great guitar from Keith and rollicking piano from Chuck Leavell, pleasingly prominent in the mix. There’s an extended “Miss You”, which turns briefly into a well-deserved feature for bassist Darryl Jones before becoming a mass sing-a-long before Mick introduces Mick Taylor, whose debut gig with the Stones was here in ’69: “We found him in the pub and put him on the stage in front of 200,000 people. ‘Good luck, Mick!’”

Now a burly man in middle age when then he was a sylph-like 22, or whatever, Taylor weighs into “Midnight Rambler” with a solo of piercing clarity, Keith replying with something slurred and grubby, the performance assuming a breathless momentum as Keith, hunched, turns to face Charlie, the song reaching an absolutely furious climax. The Stones by now aren’t so much on the home straight as a premature victory lap, the last half hour a triumphant procession through “Gimme Shelter”, “Jumpin’ Jack Flash” (Keith and Ronnie joyfully tearing it up), “Sympathy For The Devil” (played out against what looks like a backdrop of flames, with a scorching Keith solo) and “Brown Sugar”, with “You Can’t Always Get What You want” and “Satisfaction” as encores.

The Rolling Stones played:
Start Me Up
It’s Only Rock’N’Roll (But I Like It)
Tumbling Dice
All Down The Line
Beast Of Burden
Doom And Gloom
Bitch (with Gary Clark Jr)
Paint It, Black
Honky Tonk Women
You Got The Silver
Before They Make Me Run
Miss You
Midnight Rambler
Jumpin’ Jack Flash
Sympathy For The Devil
Brown Sugar

Encores:
You Can’t Always Get What You Want
(I Can’t Get No) Satisfaction