The return of Arcade Fire

For me, the strangest moment during last night’s flurry of Arcade Fire activity – Bowie! two videos! world tour! – was the footage of the band stepping out of a limousine in Montreal wearing giant papier mâché heads. 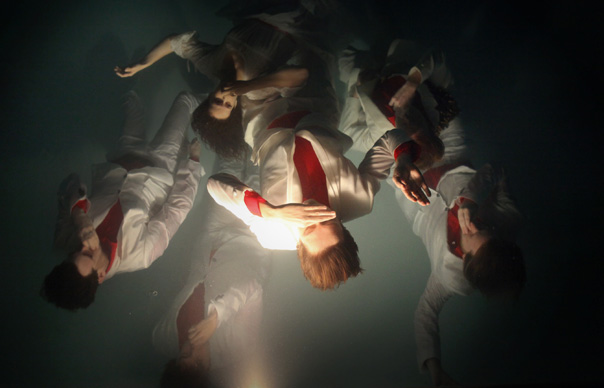 For me, the strangest moment during last night’s flurry of Arcade Fire activity – Bowie! two videos! world tour! – was the footage of the band stepping out of a limousine in Montreal wearing giant papier mâché heads.

They had arrived to play a ‘surprise’ show at a small Salsa bar in the city, and cameras from the Canadian Broadcasting Network filmed them walking silently in single file from the car towards the venue’s door, their voices presumably inaudible beneath the papier mâché. As they passed fans gathered for the show, they’d occasionally high five them; one of the band (it might have been William Butler, though it’s hard to tell with all the papier mâché) would occasionally capture the proceedings on his smart phone, which he’d rather comically raise to the mouth of the papier mâché head, presumably in line with his eyes.

We’d already seen the heads a little while earlier in Anton Corbijn’s video for the “Reflektor” single – along with a giant discoball, a man who appeared to be covered entirely in shards from a mirror, and shots of the band dancing at night round a coffin filled with children’s dolls. I wondered at one point whether this was all part of some cryptic tribute to Frank Sidebottom – another noted papier mâché enthusiast. Whatever, it was a diverting and entertaining return from the band; though any hope of a cameo from David Bowie, who’d earlier confirmed he’d contributed backing vocals to the single, seemed unlikely. And if you’ve not watched Vincent Morisset‘s interactive “Reflektor” video, you can find it here. Technical alert: users must have the Google Chrome web browser to interact with the film.

Of course, in all the news about the new single, videos, album and world tour (details to be announced), it’s worth mentioning that they’re also scoring Spike Jonze’s new film, Her, which finds Joaquin Phoenix falling in love with a computer operating system voiced by Scarlett Johansson. It’s due later in the year, and I’m wondering whether it might appear as the “surprise film” at this year’s London Film Festival. The LFF line-up was announced last week, incidentally: I blogged about the highlights here, and I’m especially looking forward to the Coens’ long-awaited Inside Llewyn Davis, Jim Jarmusch’s Only Lovers Left Alive and Alexander Payne’s Nebraska, as well as a Frank Pavich’s documentary Jodorowsky’s Dune, which explores Alejandro Jodorowsky’s attempt to film Frank Herbert’s sci-fi novel in the mid 1970’s.

Anyway, the BFI London Film Festival runs from October 9 – 20 and you can find a full list of what’s on – and when – over here.