The Making Of… Status Quo’s Down Down 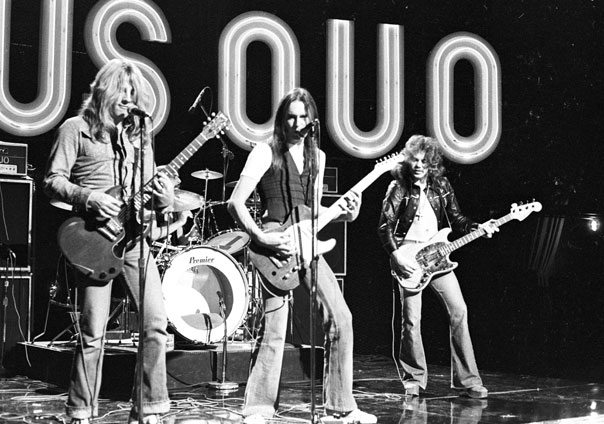 The Quo are currently on a UK tour, hitting London’s O2 on December 15 – and here’s one song that they are sure to be playing. In this piece from the Uncut archives (Take 190, March 2013), Nick Hasted hears all about the denim-clad, ‘boogie-shuffle’ giants’ 1974 hit. “We were the most uncool band in the world, yet the coolest DJ in the world was saying nice things about us…”

“We do ‘Down Down’ quite late on in the set,” explains Rick Parfitt, of Status Quo’s only No 1 hit. “You’ve got to be committed to that song, because it can’t be played half-heartedly. We have a short break just before it, and I take a few deep breaths. You’ve got to be right on your game to make ‘Down Down’ sound like it should.”

Hurtling along at 180 beats per minute, “Down Down” is the high-water mark of the Quo’s bulldozing brand of rock’n’roll. After a transatlantic hit with 1967’s psychedelic pop single “Pictures Of Matchstick Men”, the band began to work up a new sound: the 12-bar boogie “shuffle”. While neither prog nor glam, their denim clothes and driving rock’n’roll attracted a crowd catered for by few other bands prior to punk. “There was us, Mott The Hoople and Slade,” Parfitt recalls.

“Down Down” was their fourth consecutive Top 10 hit. It remained a favourite of one early fan. “We were the most uncool band in the world, and yet the coolest DJ in the world was saying nice things about us,” explains the song’s co-writer and tour manager Bob Young. “When John Peel died and they found that box of favourite seven-inch singles that he kept, and ‘Down Down’ was among them, that really meant a lot to us.”

The lineup that recorded “Down Down” eventually broke up: drummer John Coghlan and Lancaster were gone by 1985. Francis Rossi and Parfitt persevered with different lineups, but have recently reunited with Coghlan and Lancaster for a sold-out UK tour. Rossi considers Quo’s enduring appeal. “Lots of people love to knock us,” he admits, “and lots of people think they can do the Quo thing, but they can’t. Because they don’t believe it like we do.”

Bob Young, co-writer: Francis and I started writing it just before the first American tour in 1973. But we really got into it over there in LA. I remember starting it in the motel room, and recording it on a cassette. I’ve still got that recording of us talking about it, and trying to work out how it was coming together. And then we continued throughout the American tour, and then worked on it when we got back to England.

Francis Rossi, vocals and guitar: The motel was on Sunset and La Brea. Rick was out messing about with birds, and we got most of the melody sorted, then we did the lyrics at a house I used to live in at that time.

Young: All the key elements were there of the song. The main riffs were in there. The lyrics basically started out as “daa-dah-da-da-da-da”, until one of us said, “What fits?” “Down, down.”

Rossi: I remember doing the verses, and we kept coming up to the chorus going, it needs to be something. We’d done some stuff for years with Tyrannosaurus Rex, as they were – it’s funny, ’til he worked with us, Bolan was not doing boogie or anything like it. And he had that [histrionic Bolan vocal] “dabery-do, dowery-dohh” sound. So Bob said, “‘Down down’ then.” Sounds fucking great, makes no sense whatever.

Young: The key elements were locked in in the very early stages. All of Francis’ intro was on that cassette, and the little breaks when it stops then comes back in.

Rossi: That was one of the things that John Peel thought was fucking amazing – you just think they’re finished, and they go a bit further. It’s mathematical music. There’s four bars there, another four, and if you’re half-way musical, you’ll think the chorus is coming now – and we’ll go five bars. Or seven. That’s the case with “Down Down” – it goes two or three times longer than it should. I believe a lot of that came between myself and Alan Lancaster. I realised recently that we both liked Del Shannon when we were younger, and so a certain quirkiness comes from ’50s references, and certain classical stuff that we heard.

Alan Lancaster, bass: Rick came up to me and said, “Francis has got this fantastic riff, he’s got the next single.” Rick recognised it as a hit before he’d even heard the song. He thought the intro alone was going to cut it. It was very, very simple, but very fast.

Rossi: “Down Down” had been out years, and I suddenly realised the intro’s the intro to “Pictures Of Matchstick Men”. I’d nicked my own song.

Rick Parfitt, guitar: We recorded it in IBC Studios in Portland Place. We felt very comfortable there. We would go from the control room down the steps to this mass of amplifiers and drumkits. It was like sitting in the middle of a wall of sound. Everybody was up for it, we were all raring to go. There’s a picture of us somewhere, looking really rough, long hair and the jeans are all ripped, we’ve got fags in our mouths. It was camaraderie. It was the birth of this feeling we were getting of just how good we were.

Rossi: The Chinese embassy was just up the road – sometimes we couldn’t record because this morse code, dot-dash thing was coming through the amps.

Parfitt: We were either wonga’d or pissed when we recorded “Down Down”, as we usually were in those days. I’m pretty sure it was one, two in the morning when we got the take. We were sat in a circle, in the middle of the studio with the amps round us, and in those days we weren’t so paranoid about gating everything off because of overspill between microphones. We wanted to hear it as it was.

Lancaster: It’s three beats per second almost, 180 bpm. That long intro of Francis’ sets up a tempo itself. He needs to play it at a certain speed to give a ring to it – fast. But when the band come in it’s – [makes rapid machine-gun rhythm]. It sounds as if it’s slow when Francis starts, but when we come in it’s that speed. So you had to really grit your teeth and get into it. It needs a lot of power on the drums and bass. A lot of energy went into that. When I listened to it recently, it’s faster than I thought, when I tapped out those 180 bpm. It doesn’t sound that fast on record, but it is.

John Coghlan, drums: It’s the four to the bar on the hi-hat that makes it feel quite held-back.

Parfitt: Volume was of paramount importance in those days. So we used to crank the amps right up, all around us.

Rossi: Rick feels he can’t do it unless it’s excruciatingly loud.

Lancaster: We were there around that time, lights dimmed, getting into the zone, and suddenly we looked up, and we saw this guy in his dressing-gown standing there. He’d somehow got into the studio. He said, “Do you know how loud that is?” That was a surprise.

Lancaster: First time I’ve heard about a wife dying, I don’t think that’s true. If his wife was dying, we’d apologise. But Rick got up and gave him a blast! It was just right, and then this guy came in and spoiled it.

Young: It wouldn’t have been a lot of takes. It sounds almost live when you hear it. It’s still got that raw edge about it. The band produced it themselves. And maybe that naïveté of production gave a different twist to it.

Parfitt: It was how I remember Christmas when I was a kid. That’s how magical “Down Down” was.

Lancaster: It was the fastest song we ever did. Rick, me and John had to really pound it, I think it’s because of all those factors that it works. One of the reasons it was left out of the live set for many years was it took that kind of energy.

Rossi: It is so basic, it’s just one of those three, four-chord tricks. It’s a G tuning – put a capo on and it’s in the key of B. But I don’t know what the fuck it is. If I did, I’d do five of them a week, and that’s me retired.

Young: I remember telling Francis that it had got to No 1.

Rossi: I was in a bath in France, and that’s the closest I came to wrecking a room. I splashed water everywhere.

Parfitt: We’d got to No 1, by just being what we were. It elevated throughout the ’70s. Lots of money you’ve never had before, and we were just so happy about the success, on a scale that you don’t know what’s hitting you.

Rossi: Cocaine has a great knack of just zeroing everything. There’s no up, there’s no down, after a while. I was doing coke ’79 until ’87. It was probably ’86 when I was lying on this bed in Switzerland, teeth clenched, wishing this feeling would just go away. And you had a quick toot, and for 35 seconds it was gone. And then it would come back again.

Parfitt: Aah, it was like a time-bomb, the success that we’d had in the ’70s. It tore me apart, and it tore the band apart, it tore our lives apart. It had gone fucking mad, in an evil way. We split up in ’84 because none of us could get on. We had to do another album by contract, so we warmed the engine up again with new people.

Coghlan: I went back to the Isle Of Man. Our manager said he thought I was heading for a nervous breakdown.

Lancaster: People think getting chucked out of a band is just a little thing, but it’s catastrophic. We basically lost everything over it. It was literally both a blessing and a curse, Quo. It was absolutely heaven. And almost overnight, it went to hell. I don’t think John and I have ever recovered. I don’t think Rick and Francis will ever realise how much we suffered. It’s a lifetime we left behind. Your identity, really.

Lancaster: Francis and me were the ones that put the band together in 1962. They’re all my closest friends. I’m trying to persuade Francis to get rid of the click-tracks, so we can play songs like “Down Down” the way we used to.

Parfitt: It was a great thrill to see Alan again, and Spud [Coghlan]. It felt nice, it felt lazy. It felt very ’70s. I hope that we can capture some of the magic that we had way back when. It’s been shut in a box for many years.