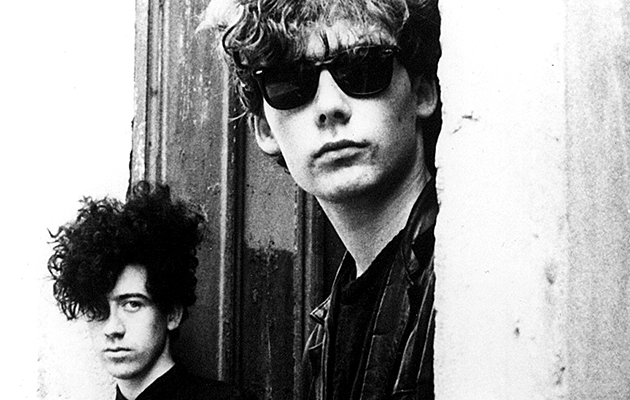 Thirty years ago, The Jesus And Mary Chain were smashing up paint factories on acid and plotting their career in an East Kilbride bedroom. Soon, there would be riotous gigs, startling records, leather trousers, animosities and a musical revolution born out of white noise. Now, as they recreate the maelstrom of Psychocandy onstage, William and Jim Reid look back… “We don’t punch each other in the face anymore. But it’s pretty intense.” Story: Tom Pinnock. Originally published in Uncut’s December 2014 issue (Take 211).

Reflecting on the remarkable 30-year career of The Jesus And Mary Chain, William Reid seems as surprised as anyone that they’ve made it this far. “Growing up, music was a different universe,” admits the guitarist and songwriter. “It felt like being a musician would be like winning the lottery 100 times in a row. Then straight from the go, we had people despise us and love us.”

This month, William and his younger brother Jim celebrate the 30th anniversary of their ’85 debut LP with a UK tour. “It is strange to be playing Psychocandy again,” William admits. “But hopefully we can do it justice. I want to make records and show people we’re not a ‘heritage act’. What a fucking horrible term!” But critically, the prospect of the warring Reid brothers still being around to honour the Psychocandy anniversary is something few would have bet on back in the ’80s. In those days, William, his younger brother Jim, bassist Douglas Hart and drummer Bobby Gillespie were laughed at by their label, dismissed as “just noise” by their critics and almost killed by their own fans. Even more surprising than their survival, perhaps, is the fact they are planning to record new music as soon as they can. “I want to make an album this year,” confirms William with some intent. “Or two. We’re trying to get our shit together and hopefully it’ll happen.”

Despite reforming for live shows in 2007, the Mary Chain – with Jim and William now joined by Phil King on guitar, Mark Crozer on bass and Brian Young on drums – haven’t released a new album since 1998’s Munki. But both brothers admit that each have a number of songs stockpiled, with the only obstacle agreeing where and how to record them.

“It’s difficult,” explains Jim Reid. “William lives in LA, I live in southwest England. But we’re getting on about as well as we can. You put the two of us together for any length of time, there’ll be some sparks. It’s the way it’ll always be, I guess. But we’ve learnt to back off when the right time to back off is.”