Yesterday afternoon, I did something that I should probably, as a curious and more or less responsible music journalist, have done weeks ago: I listened to the debut album by Haim, “Days Are Gone”. 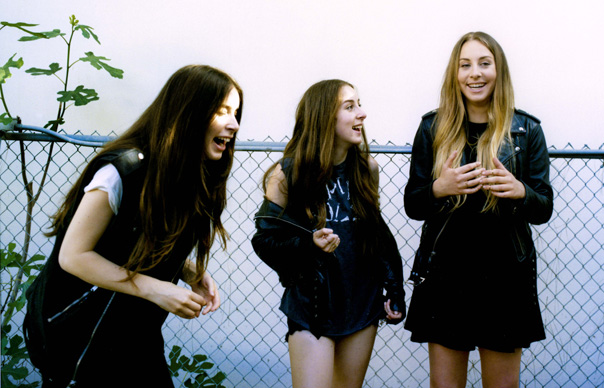 Yesterday afternoon, I did something that I should probably, as a curious and more or less responsible music journalist, have done weeks ago: I listened to the debut album by Haim, “Days Are Gone”.

The album is streaming at NPR, and it instantly provoked a good deal of social media praise for Haim, and a degree of rancour aimed at their detractors (perhaps surprisingly, considering my interests, I wasn’t actually hearing much from these purportedly omnipresent detractors on my Twitter timeline).

Given the embattled tone of some of Haim’s fans, you’d be forgiven for thinking they were defending a minority cult like New Model Army (Number 20 in the midweeks, as I type) rather than the most universally celebrated new band of 2013. A lot of the Haim haters were misogynists, it was claimed, while Jonathan Dean of The Sunday Times suggested, “Middle-aged men moaning about Haim being derivative are the new boring.”

I haven’t, thus far, paid a huge amount of attention to Haim, not least because I’ve found their media ubiquity a bit wearing. “Days Are Gone”, though, is an imposingly well-written and constructed album, and I genuinely like “Falling” (I’ve heard that one before; well done, me) and a warped R&B track, “My Song 5”, that calls to mind Destiny’s Child’s terrific “Get On The Bus”. Not all of the album is exactly to my taste, though, something crystallised by a note alongside the stream at NPR written by Ann Powers. “Geoff Barrow of the revered English band Portishead,” she reports, “recently maligned the fast-rising Los Angeles sister act with a snippy tweet: ‘Hiam [sic] sound like Shania Twain… When did that become a good thing?’ To which this critic replies: Who said it isn’t?”

Nevertheless, it really is a weird situation, at least for old-school music snobs, when a song that does sound a bit like Shania Twain (it’s called “The Wire”) seems to win broadly consensual critical approval. In the great scheme of things, it’s not a bad development that pop music formerly sneered at as disposable is treated much more seriously – and more than that, is unambiguously and enthusiastically liked by serious music writers – now. Not so long ago, in the halcyon days of landfill indie, the poptimists would complain about, say, a Rachel Stevens single being ignored in an aggrieved tone reminiscent of Steve Lamacq berating NME’s editor for not putting Leatherface on the cover (or of me championing Red House Painters against Oasis, if I’m honest).

Now, the pro-pop stance is the majority critical voice, epitomised by The Guardian choosing Carly Rae Jepsen’s “Call Me Maybe” as the best single of 2012. I don’t want to align myself with a lot of the anti-Jepsen commenters who responded to that decision on Guardian blogs (now there was misogyny, for sure). But it does feel professionally risky to say, actually, I don’t really enjoy most of the Haim album. Amusingly risky, I’ll concede; our come-uppance may well be overdue after so many years of entitlement, and I don’t want this blog to come across like a wail of indignation from the Great Oppressed White Middle-Class Male. After all, I am fortunate enough to work for a magazine that continues to provide a handsome platform for my indulgences.

My problem isn’t that “Days Are Gone” is derivative, as such: it actually seems to fuse a range of different influences rather than assiduously copy one of them (a sage colleague at Uncut reckons Ladyhawke is their closest antecedent). To adapt Dean’s indictment, I’m a middle-aged man moaning not because Haim are derivative, but because they’re derivative of some music I never much liked in the first place. Tweaked ‘90s/millennial R&B (especially Timbaland productions)? That’s fine, I was keen on a lot of that. Digitally upgraded ‘80s soft rock, latterday Fleetwood Mac, Shania Twain? Less so.

You could justifiably argue that, instead of fussing over a record that really wasn’t designed for me, I should concentrate on new music I like, so I’ll swiftly link to a few recent blogs aboutCian Nugent and Chris Forsyth, Bill Callahan and Matthew E White. But I am old enough to remember a time when there were music critics who didn’t like “Tango In The Night” (an album which, interestingly, didn’t even make NME’s Top 60 of 1987).

The generational shifting of critical attitudes; the past being reconsidered and rewritten (I wrote about this in a blog called ’Nostalgia, anti-nostalgia, personal revisionism and one last sort-of review of Daft Punk’s Random Access Memories’); the debunking of elite male rock hegemonies – these are usually healthy and useful developments.

But few things can rouse a critic more than the opportunity to be a dissenting or misunderstood voice, to assume the role of underdog, even victim. “Each person must, on some level, take himself as the calibration point for normalcy,” wrote Teju Cole in the book I was reading this morning, Open City, “must assume that the room of his own mind is not, cannot be, entirely opaque to him. Perhaps this is what we mean by sanity: that, whatever our self-admitted eccentricities might be, we are not the villains of our own stories.”

I’m not crazy about Haim, and I really should have better things to do than feel self-reflexively guilty about it. Now let me tell you about how much I prefer Lindsey Buckingham solo to Fleetwood Mac…