The Grateful Dead and the ultimate “Dark Star”

It’s not a situation I could have predicted 20 years ago, I’ll admit, but there’s a point I reach quite often on Friday afternoons when all I really want to hear is The Grateful Dead. As default, I’ll cue up something from 1972 – the Wembley Empire Pool set from that year, say – mention it on Twitter, then receive a lot of static from my Dead friends who see me as something of a lightweight for clinging so conservatively to that year. 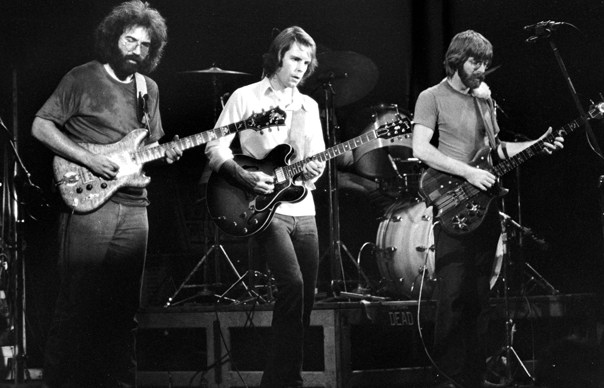 It’s not a situation I could have predicted 20 years ago, I’ll admit, but there’s a point I reach quite often on Friday afternoons when all I really want to hear is The Grateful Dead. As default, I’ll cue up something from 1972 – the Wembley Empire Pool set from that year, say – mention it on Twitter, then receive a lot of static from my Dead friends who see me as something of a lightweight for clinging so conservatively to that year.

Being a Dead fan, of course, can easily be a full-time occupation, and I’ll readily admit to lacking that kind of deep knowledge. Even a single live take on “Dark Star”, for instance, can contain multitudes.

John Oswald’s “Grayfolded”, meanwhile, contains multitudes of “Dark Star”s. In my navigations of the Dead, the avant-garde fringes of their work remain fascinating; stuff like the “Seastones” proto-ambient album from their sometime electronic collaborator Ned Lagin, for instance (I once accidentally played “Seastones” at the same time as a Chris Robinson Brotherhood album, and can totally recommend the experiment).

“Grayfolded” is something I’ve wanted to hear for a long time, so it was nice to discover that the Important label were reissuing Oswald’s composition from the mid-‘90s. I say composition, because Oswald is technically a composer, though one who is routinely classified as working within a self-defined genre called Plunderphonics; conceptual art that privileges a meticulous collagist approach to making music. Sampling, ostensibly, I guess.

For “Grayfolded”, in the early ‘90s, Oswald dug deep into the Dead’s tape archive in San Rafael, where the band’s archivist Dick Latvala helped him sift through myriad live takes on “Dark Star” and other notably free jams. “I often played through [the reel-to-reel tapes] once at double speed,” Oswald tells Jon Dale in a piece in the next issue of Uncut (out next Tuesday, June 24, in the UK), “listening for atypical performances and particularly good playing, and dubbing those sections. I think I copied only one complete performance.”
Oswald then stitched the extracts together, folding one incantatory solo in on another, eventually coming up with a 110-minute piece, “Grayfolded”, that works as a sort of ultimate “Dark Star”. The composer is not by any measure a big Dead fan, but what’s remarkable about “Grayfolded” is how well it functions as straight-up Dead music. Given its construction, you could be forgiven for expecting Oswald’s project to be something of a detached, technical satire, something which archly mocks Jerry Garcia and his bandmates’ long-windedness rather than celebrates it. Happily, though, it’s a conceptual piece which captures the exploratory essence of the Dead’s original MO, then pushes that questing imperative much further than even they dared to go back in the day.

In the nature of many good jams, “Grayfolded” turns out to be an exercise in endlessly delayed gratifications. Again and again, guitar lines keep massing towards some kind of climax – there is a tantalising epiphanic tease halfway through “In Revolving/Ash Light” – only to dissolve before any big pay-off and start the ambulatory climb again. Twenty-five minutes in, deep in “Clouds Cast”, Oswald decides to drop in a vocal, but stops on the word “Dark”, stretching it out for minutes into a suitably celestial drone. Later, long passages are closer to the airy, dislocated nature of a late ‘60s/early ‘70s “Drums/Space” than a “Dark Star”. “The Phil Zone”, knowingly, has some hairy bottom end grind.

Over nearly two hours, though, it’s the nuanced musicality of “Grayfolded” which is so satisfying, at least some of it perhaps the result of serendipitous accidents. Oswald sculpts and orders improvisations, managing to add weight to freeform music while retaining its spontaneous vibe. Judged as transporting kosmische music, the piece works beautifully. And as an exercise in the fastidious threading of noodles, it’s pretty remarkable. I wonder if any Deadheads have successfully worked out where all the extracts originate from?