The Grateful Dead + a round-up of newish releases 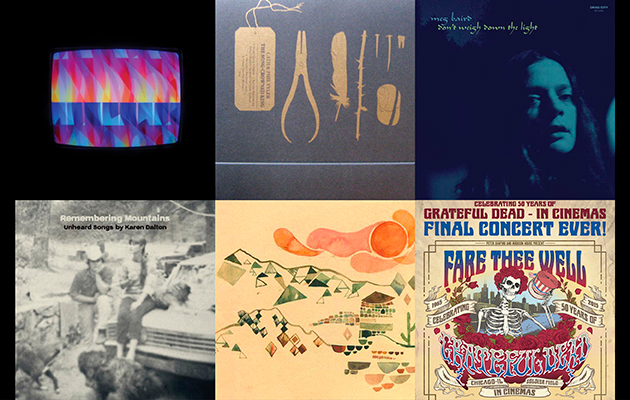 A little glamorously jetlagged today, after making it back from the Grateful Dead’s reunion show in California at the weekend. It was pretty strange following reaction to Kanye West’s Glastonbury show on Twitter in my hotel room, then heading out to see a strikingly on-song Dead in front of 70,000 people in Santa Clara. I also met many excellent people, including one who’d lost his shoes and was looking to trade LSD for use of a phone charger.

I’ll be writing plenty about all this in the next Uncut, which will have one or two other nice things to entice Dead fans and the Dead-curious. In the meantime, try this for size: a blazing version of the garage nugget “Cream Puff War” from Saturday’s show…

This week, though, I thought it might be useful to round up a few records I’ve liked recently, beginning with Meg Baird’s lovely “Don’t Weigh Down The Light”. Over various solo sets, collaborations with sister Laura, and three tremendous albums fronting Philadelphia’s Espers, Meg Baird has been a torchbearer for the kind of candlelit psych-folk that was briefly hip in the early ‘00s. Fashions change, but Baird’s music remains gorgeous, harbouring a kind of still magic without ever resorting to self-consciously wyrd affectations. Now relocated to San Francisco (where she’s also joined a blazing Comets On Fire offshoot called Heron Oblivion), the likes of “Back To You” are as close as Baird has come to the brackish atmospherics of Espers since their 2009 swansong. A strong companion piece, also, to another 2015 invocation of old California, Jessica Pratt’s “On Your Own Love Again”.

Baird wouldn’t have been out of place on “Remembering Mountains: Unheard Songs By Karen Dalton”, an engaging Tompkins Square comp that features Sharon Van Etten, Lucinda Williams, Diane Cluck and more tackle the legendary singer’s lost lyrics. Dalton’s uncanny music casts a long shadow over a clutch of latterday singer-songwriters, but it is this compilation’s fundamental strength and weakness that most of the 11 artists gifted here with unused Dalton lyrics do not imitate the late singer’s fragile style. Instead, Dalton’s words are discretely recast in the interpreters’ own musical images: most radically and successfully by Julia Holter on the hushed electronic nocturne, “My Love, My Love”. Marissa Nadler and the fine Josephine Foster come close, but the spirit of Dalton remains curiously evasive, so that “Remembering Mountains” feels more like a neat compendium of diverse female talents rather than a tribute to a transcendent one.

Cath & Phil Tyler’s “Dumb Supper” (2008) stands as one of the best, if relatively unheralded, British folk records of the last decade, and one whose unvarnished aesthetic straddled the worlds of traditional and experimental folk in much the same way as contemporary records by Alasdair Roberts. A compact and haunting six-tracker by the Newcastle-based couple, “The Song-Crowned King” operates in similar territory, with the opening take on the Child Ballad “Bonnie George Campbell” a notable stand-out. There’s also, though, an increased keenness to point up the raw affinities between British and Appalachian folk, especially on two instrumentals, “Puncheon Camps” and a droning fiddle jig, “Boys The Buzzards Are Flying”, that recall the Tylers’ Transatlantic fellow travellers, The Black Twig Pickers.

Once the dust has settled after Record Store Day, and the limited-edition Red House Painters box sets have been flipped multiple times on eBay, there may still be some excellent, less heralded albums still lurking out there in the racks. In 2014, one such gem was a flaming live album by Chris Forsyth’s “Solar Motel Band”, and this year there’s a decent chance you might still be able to track down “Deseret Canyon”, an understated instrumental set by another modern guitar master. William Tyler’s solo career is reasonably well-established now, thanks to expansive post-Fahey meditations like 2013’s “Impossible Truth”.

In 2008, however, he was a more anonymous figure in the background of Lambchop and Silver Jews sessions, with a solo album, on an obscure German label (Apparent Extent), released under the name of The Paper Hats. “Deseret Canyon” is that album, belatedly reissued under Tyler’s own name, and a critical part of a stealthily impressive solo catalogue. As with “Impossible Truth”, moments recall David Pajo’s dreamy rewiring of “Turn, Turn, Turn” (cf: “Parliament Of Birds”), but there’s a satisfying range here: stately Takoma School fingerpicking; scrabbling, fuzzed-out electric jams; even a phased ambience that further emphasises the widescreen possibilities of Tyler’s strikingly evocative music.

Those more ambient passages illustrate the potential space to exploit between kosmische and roots music, something Chicago’s Bitchin Bajas have managed on recent collaborations with Bonnie “Prince” Billy. In a surprisingly crowded field, the Bajas have gradually revealed themselves, in the past year or two, to be the best latterday exponents of a certain meditative and transporting strain of kosmische music. Last year’s self-titled fifth album, rich with Terry Riley allusions, probably remains their masterpiece, but “Transporteur”, a vinyl/cassette edition from Cooper Crain and his collaborators, is very nearly as good.

Lunar drones, deep space oscillations and reed jams proliferate, as usual, but the key touchstones on “Transporteur” are more likely Cluster and Harmonia, as exemplified by “Marimba”, which pulls off the rare Moebius and Roedelius trick of being at once jauntily playful and, in a psychedelically-adjusted way, rather serene. And if you missed this one, there’s yet another Bajas album, a collaboration with Natural Information Society called “Autoimaginary”, out pretty soon.

The August 2015 issue of Uncut is in shops now – featuring David Byrne, Sly & The Family Stone, BB King and the death of the blues, The Monkees, Neil Young, Merle Haggard, the Only Ones, Flying Saucer Attack, Ezra Furman and more.