The genius of Terry Riley 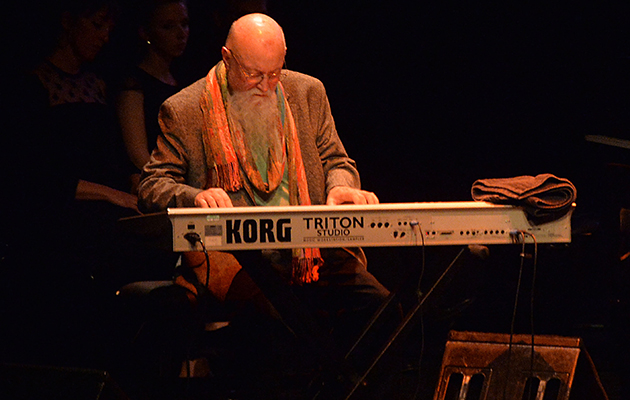 I tend to write about eight or nine albums in each issue of Uncut, and barely a month goes by without me dropping the name of Terry Riley into at least one review. Clearly this is down to my personal taste, and also the fact that Bitchin Bajas seem to release something most months. Nevertheless, Riley’s rippling, delay-and-drone, improvised take on minimalism seems to be having an elongated moment of influence among more exploratory musicians from a much younger generation.

Riley, it turns out, has just turned 80, and on Saturday he performed a rare UK show at the Barbican in London. It was a pretty varied and absorbing show, which threw out a bunch of links to his last 50 years of ravishing music, while at the same time moving into territory that felt kind of new for him.

Riley’s roots lie in the ’60s avant-garde, to the musicians who expanded on the ideas of John Cage and found some unsteady common ground with the more adventurous end of rock music: the likes of Steve Reich and Lamonte Young. He’s usually classified as a minimalist, but that always seems to be a problematically reductive take on his musical scope, since even “In C” – the piece with which he made his name, and which is most frequently described as a key minimalist text – is often rendered as a busy, exuberant grid of overlapping improvisations, rather than some aural take on a Donald Judd piece.

“In C” is great, but I always direct Riley neophytes to start with “A Rainbow In Curved Air” from a year or two later, the critical work that established Riley’s timelag organ flurries and reed drones and presented him, very loosely, as a psychedelic JS Bach. Lots of his subsequent records provide variants on this sound – sometimes meditative, sometimes euphoric; personal favourites include “Persian Surgery Dervishes” and “Shri Camel”, but there’s a lot to explore, and not much to avoid.

You could hear plenty of strands from this tradition in the fifth section of Riley’s Barbican concert, when he moved behind a Korg Triton synth and embarked on a dazzling solo piece that started off reminiscent of his most recent album, 2012’s “Aleph”, before moving into the sort of ravishing overdrive that felt like an update on another one of his crucial ’60s pieces, “Poppy Nogood And The Phantom Band”. As the accompanying films ramped up the music’s hallucinatory potential, I started seeing it as a radical twin experience to the Grateful Dead revisiting “Dark Star” in Santa Clara at the end of last month: twin poles of psychedelia, reverberating in sync.

Riley could’ve jammed like that all night, but the overall performance – titled “Bell Station III” – hinged on a collaborative piece he’d spent the week workshopping with members of the London Contemporary Orchestra and the Tiffin Boys’ Choir. He split this into three frequently frantic sections, in which the boys’ voices were underpinned by a couple of manic toy pianos, bits of brass and some immensely skittish percussion. I couldn’t immediately find an analogue for this in what I know of Riley’s catalogue – if anything, it reminded me more of an unusually buoyant John Adams piece. Nevertheless, the loops and swoops of Riley’s fluid style could still be detected, just about, and with them the sense that you can always find a path of serenity through his work, even when it is at its most manic.

A clue to how Riley pulls off this particular trick was provided, perhaps, by the opening section of “Bell Station III”: Riley sat alone, cueing up harmonium drones and tabla on what may well have been his phone, then launched into a lengthy raga that increased in intensity, joy and vocal strength as it went along. This was Riley’s debt to the Indian master Pandit Pran Nath at its most transparent, but the ornate melodic flourishes of raga underpin everything he does – even another solo section of the concert, when Riley took to a prepared grand piano which started out like a spindly Cage piece, but again acquired a cumulative power the longer it lasted, with rapid deep rumble being twinned with a nimbleness that shaded closer to jazz territory.

Maybe Riley’s music is always about patterns, that become more vivid and complex as he piles on layer after layer of sonic detailing. On his early records and performances, he’d do this using timelag delay, or tape loops (check his amazing deconstruction/extrapolation of a marginal R&B side on “You’re No Good”). At the Barbican, he seemed to be showcasing how he could create the same heady effects using either a synth, two hands on a piano, a choir and orchestra – or even just his own voice, and his faith in the intoxicating potential of Indian devotional music. A portal to ecstatic states, arrived at by different paths – and even on his own, not exactly minimal…