As The Felice Brothers tour the UK and perform at End Of The Road festival this weekend, it seems a good time to battle through the Uncut archives and see how the group were doing back in August 2009 (Take 147). Marc Spitz heads out to upstate New York to see how these self-mythologising drifters created a glorious new take on roots rock from the comfort of a chicken coop. Just don’t, whatever you do, mention Bob Dylan and The Band... 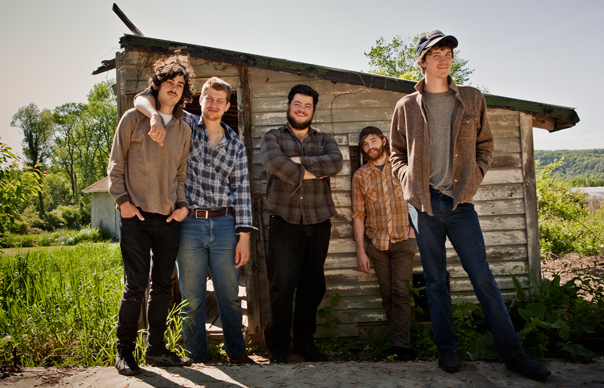 As The Felice Brothers tour the UK and perform at End Of The Road festival this weekend, it seems a good time to battle through the Uncut archives and see how the group were doing back in August 2009 (Take 147). Marc Spitz heads out to upstate New York to see how these self-mythologising drifters created a glorious new take on roots rock from the comfort of a chicken coop. Just don’t, whatever you do, mention Bob Dylan and The Band…

It’s no stretch of road you’d want to pick up a drifter on. There aren’t any traffic lights and the bleached grass on either side of the narrow, asphalt strip is tall enough to lose a body in. The signs for fresh eggs and firewood seem pleasantly rustic, but there’s something Blair Witchy about New Paltz, a small college town in upstate New York. This becomes increasingly apparent once you turn off Main Street, leaving Starbucks and hippy shops like Karma Road and the Groovy Blueberry behind, and head out into the country. So, with car doors firmly locked, Uncut guns past the bearded James Felice as he heads on foot towards our interview, at The Felice Brothers studio-cum-rehearsal space on the outskirts of town. But when we arrive, there’s no sign of the band.

“Go knock on the chicken coop,” a helpful repairman advises from the top of a ladder. “There may be more of ’em in there…”

Unable to identify a chicken coop correctly, we pad rather meekly past dandelion patches, seed rows, a workbench, and some found-object sculpture straight out of The Wicker Man. Finally, we come to a cement structure that appears to be secure enough to have contained fowl at some point in American history. The first person we meet at the coop is Dave Turbeville, who introduces himself as the band’s brand new drummer, the replacement for Simone Felice who left at the start of the year to form his own band, The Duke & The King [see panel, right]. A native Floridian, Dave sits through the interview and even poses for the photoshoot. It’s only later we find out we’ve been spoofed by these mischievous Felice Brothers. Dave’s a friend who’s living with them. He’s not, in fact, their drummer – that space is currently filled on tour by the band’s producer, Searcher.

Inside the coop, bales of hay double as stools and shelves, scattered with DVDs and CDs – Ingmar Bergman’s Fanny And Alexander, a Bob Wills And His Texas Playboys boxset – what might be plastic guns and a well-drained handle of whisky. Antique microphone stands, a vintage xylophone, pianos both acoustic and electric, a bass, a banjo and a sparkly drumkit the colour of mother of pearl clutter the space. Two setlists are nailed to a supporting post. A wood stove heats the place in the winter and in summer, birch and maple trees provide shade. A disused Ford, on leave or loan from Alabama’s Steele Baptist Church is the de facto supply closet. There are two beds that look like they exist only for the purpose of drunken flopping. Tapestries and hanging quilts act as soundproofing.

“You can smoke in here, it’s okay,” says Dave the non-drummer, although the place is essentially a tinderbox.

When James finally arrives, he is perspiring heavily, but seems not to be offended that we didn’t offer him a lift. “You want some eggs?” he asks as he genially moves his burly frame into the communal kitchen and grabs a pan. “I think I’m going to fry some eggs.” Bassist Christmas – just Christmas, like Madonna or Pink – slight and snaggle-toothed, appears next. Fiddle player Greg Farley, gangly with an amused grin that doesn’t seem to ever fade, follows. Then finally in comes lead vocalist and guitarist Ian Felice, intense and suspicious underneath his trucker hat.

“What’s this interview for?” Ian asks, before he leads the band into the low and heavy sun. “Let’s do this outside, then,” he suggests. “You’re going to want to watch out for ticks,” he adds, with a vaguely sinister smirk.

There are three Felice brothers by blood – the now-departed Simone, 32, Ian, 27 and James, 24. They grew up north of New Paltz in the even smaller and more rural Palenville, population 500 or so. “A lot of firemen,” Ian says. “A lot of alcoholics.” It might be easy to imagine they were raised on roots music, but the band have a keen appreciation of gospel, Delta blues, folk, country swing and barn dance waltzes that’s evident in their music. “It’s not like you grow up in a small town and everyone is playing banjos and riding horses anymore. In small, poor towns they listen to rock’n’roll,” James says. “We listened to whatever was on the radio. Classic rock mostly,” adds Christmas. Working odd jobs as a cook or carpenter alongside older mountain denizens amounted to a history lesson for Ian, who soon began writing songs.

“I started getting into the Harry Smith Anthology,” he recalls. “I’d started singing, probably as an infant, but I didn’t take it seriously until later. I wasn’t analysing it. I was just doing it. You don’t know if it’s good. It just feels good.”

Drummer Simone, who’d been playing in bands since he was 14, pulled the brothers together as first The Brothers Felice, and then The Felice Brothers. Midway through this decade, they relocated 100 miles south, settling in the industrial hipster zone of Williamsburg, Brooklyn.

“It was a scary place,” Christmas says of the modest apartment they all shared. “We had to live with the superintendent,” he adds.

“He was constructing a robot in the kitchen,” Ian recalls.

“As a slave,” James remembers. “He would feed all the cats in the neighbourhood. We’d leave for the day and everyone’s toothbrush would be inexplicably wrapped in foil when they came back.”

Long shifts spent busking in the subways taught them the art of showmanship. During a spot at the Newport Folk Festival in 2008, for instance, a bolt of lightning knocked out the band’s power supply. They responded with an acoustic sing-a-long of Pete Seeger’s “This Land Is Your Land”.

“We learned a lot about performance,” explains Ian. “A lot of our sound came about just trying to get people’s attention, getting them to clap and get them to give you some fucking money.”

“Penn Station”, from the band’s latest album, Yonder Is The Clock – Uncut’s Album Of The Month for May – recalls the desolation of being stranded under New York’s 7th Avenue South (“with a toothbrush and a comb, five dollars and a dead cell phone”). They recorded their debut, 2006’s Through These Reins And Gone, live and fast, mostly in single or double takes. “The punk rock way,” Ian deadpans. Then, in 2007, the band headed back upstate, moving into a house a short distance from the coop. “A friend of ours let us settle here because we had nowhere else to go,” explains Ian. This is when they began the much-needed renovation work on the roofless coop. “We couldn’t rehearse when it rained,” Farley recalls.

By their own parlance, the Felices loosely divide their material into sweet and slow “dreamscapes” and their faster, darker counterparts, “terrorscapes”.

Terrorscapes, according to Ian, are a relatively new development in the band’s songwriting. “The first 20 songs we wrote were waltzes,” he says. “They just make you swing nice.” Both strains of Felice composition contain desperate third-person narratives that could double as short stories. There are very few references to anything that predates the Great Depression – but it doesn’t feel hokey, like some war re-enactment, rather the product of a sincere affection for the olden days. Through These Reins… arrived just as the garage rock and post-post punk movements in America were disintegrating, and the band’s use of fiddles, washboards and horns, while steeped in tradition, sounded positively radical. Ian’s dust-choked vocals fit perfectly into context among the new old weird America of Waits, Vic Chesnutt and even Wilco. As they toured the States in their “shortbus” [US slang for a half-sized school bus often used by special needs students], they busked during the day and pulled paying customers to their shows at night. They sold their CDs at the merchandise table and online, soon building a sizeable fan base both at home and in Europe, where 2007’s Tonight At The Arizona was released on UK indie, Loose Music.

“We got lucky,” Farley says humbly. Bright Eyes’ Conor Oberst, who knows something about protecting local sensibilities while taking his music to the world, mentored and signed them to his Team Love label. The Felice Brothers – shortlisted for the Uncut Music Award – arrived in March 2008, and the band recorded Yonder Is The Clock that July, before Simone decided to leave.

“Simone had music in his heart that he needed to play,” says James.

While they are more authentically “down home” than Bob Dylan was during either his Woody Guthrie folk urchin or Woodstock/superstar exile phases, they are hardly free of artifice and self-mythologising. Like Sam Shepard, Cormac McCarthy – a band favourite – or even Mark Twain (whose final, unfinished novel The Mysterious Stranger supplies the title for Yonder Is The Clock), the Felices are clever enough to know that the image of the folkie-genius is an irresistible one. And yet these press hooks have become talking points they all find supremely tedious.

“It’s always the same,” James says, “[Journalists say] ‘You guys started playing music on your porch?’ Back in the day we liked all the stories. We thought they were funny to say crazy shit like that. There’s a story that Christmas was a dice thrower. He’s not a dice thrower. Although he has the personality of a dice thrower.”

Dylan’s Basement Tapes, recorded with The Band in these very mountains four decades ago, has been cited as a virtual template for every note played in this coop. This vexes them more than anything.

“Give it up with that shit. I know you love Dylan and all that, but we’re our own fucking band for sure.” Farley says, finally losing his grin.

“I never heard The Basement Tapes before in my life,” Ian swears.

“We get influenced big-time by books,” Farley adds. “We’re a bunch of bookworms. People never see any of that shit.”

And yet this is a gang long used to being misunderstood or dismissed. They’re banned from many establishments in New Paltz.

“We’ve got bad reputations,” Farley admits. The cops know their names. At least one neighbour has threatened them with violence.

“We almost got into a gunfight,” Ian says.

“He didn’t really wanna pick up what we were putting down,” James drawls mockingly.

And yet their music has already taken them further and enabled them to see more of the world than just about anyone else up here ever will. “If I didn’t play music, I’d be working six acres,” Ian shrugs. “A plot of land. Born here. Die here.”

Tomorrow, they’re due to leave again, to points south, west, and over the sea. “I’ve never been anywhere in this country,” James says, “Except when I’m on tour.”