There’s a feature in the new issue of Uncut by Andy Gill on the Chris Robinson Brotherhood, where he gets to see a couple of extended shows in Cleveland, and I can’t recall the last time I felt so jealous of one of our writers. 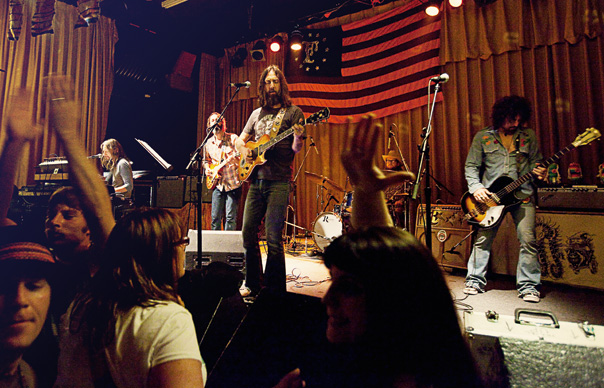 There’s a feature in the new issue of Uncut by Andy Gill on the Chris Robinson Brotherhood, where he gets to see a couple of extended shows in Cleveland, and I can’t recall the last time I felt so jealous of one of our writers.

Andy draws a lot of Grateful Dead parallels in his excellent piece, as I did when I was writing about the CRB debut, “Big Moon Ritual”, a while back. All of that is hammered home even more emphatically on the rapid follow-up, “The Magic Door”, which fortuitously arrived in the office the other day.

The seven tracks here stem from the same sessions as those on “Big Moon Ritual”, and it may be useful to see “The Magic Door” as a kind of second set, opening as it does with a sauntering, good-time take on Hank Ballard’s “Let’s Go, Let’s Go, Let’s Go” in the tradition of “Good Lovin’” or “Promised Land”.

This time, Neal Casal’s vibrational guitar solos don’t feel quite so prominent, though there is a spectacularly pining one that cuts a swathe through “Appaloosa”, a blue-eyed and wasted ballad in the same mould as “Star Or Stone” on the last record. If one of the Brotherhood take the spotlight, it’s probably Adam MacDougall, who appears bent on summoning the ghosts of most every Dead keyboardist he can recall, plus a bunch of even more cosmic Moog practitioners, often in the space of one extended song.

It’s most noticeable on “Vibration And Light Suite”, one of those curiously funky songs in the vein of “Eyes Of The World”, in which MacDougall touches on the styles of both Keith Godchaux and Ned Lagan. The Brotherhood keep pulling and tugging the song into inspired new directions, until it passes through a jam and devolves into musique concrete.

The standout, though, is possibly “Someday Past The Sunset”, which channels the same kind of roadhouse blues that Dylan focused on for “Together Through Life”, then takes it some place notably more menacing and elevated. I should mention at this point, too, that if you haven’t seen it already, Allan has blogged about Dylan’s new one, “Tempest”, here.

It all wraps up with “Wheel Don’t Roll”, which feels like a mellowed sequel to “Tulsa Yesterday”, the track which opened “Big Moon Ritual”. A neat way to wrap up that second set, really: I can’t help thinking the whole bunch of songs would’ve worked better as a big and coherent two CD set, but that’s a small quibble. Wonderful music, and the extraordinary promise of what they must be like live (thanks to all of you who wrote about that on the last blog) moves ever more sharply into focus.