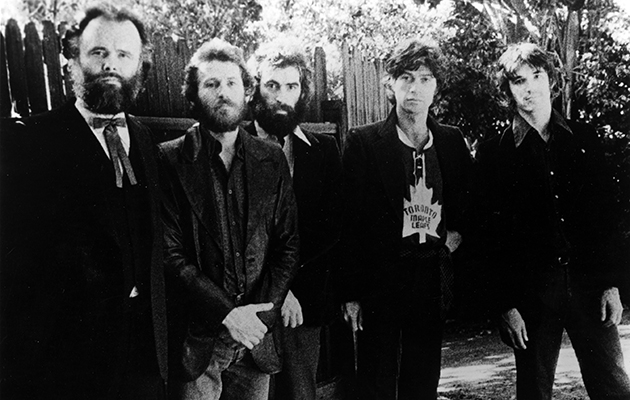 “People were like, ‘What kind of music is this? Where in the world did this come from?’” Almost 50 years ago, The Band released Music From Big Pink, an album that drew on the richest musical traditions of America – “From the Ozarks to the Mississippi Delta to the dustbowl,” Robbie Robertson tells Uncut. Five miles out of Woodstock, we reconstruct the story of a landmark album with the help of its surviving players… A tale of five young men (and an illustrious neighbour), dressed as sharecroppers, going back to the source – and changing the future of music in the process… Originally in Uncut’s August 2013 issue (Take 196). Words: Graeme Thomson

In the mountains to which they had lately retreated, the roar of the changing world they’d just escaped was much reduced. Elsewhere, psychedelic tumult prevailed. It was 1967, the age of Aquarius and all that. The year, that is, of Sgt Pepper, Are You Experienced, The Velvet Underground & Nico, Absolutely Free, Smiley Smile, Strange Days, The Piper At The Gates Of Dawn, Safe As Milk, Surrealistic Pillow, Forever Changes, Disraeli Gears. The airwaves were full of acid rock. Music was getting louder, more complex, experimental. It was a time of hippy rebellion, free love, be-ins, freak-outs, LSD, peace marches, anti-war demonstrations, utopian politics and drum solos.

Up there in the Catskills, though, on the northeastern end of the Allegheny Plateau, many things were much as they always had been. The changes rocking America were barely noticed here, where the pull of the past was still keenly felt and where in that notable summer Bob Dylan’s former backing band, once known as The Hawks, four road-hardened Canadians and a kick-ass Arkansas farmboy, were working on a record that found virtuous inspiration in the music of an older America and would turn out to be one of the great game-changing albums of that or any era.

Music From Big Pink, The Band’s 1968 debut, has become such an ingrained and influential part of our musical landscape it’s difficult to imagine a time when it didn’t exist – or how shockingly against-the-grain it was when it first arrived. In Big Pink, a modest tract house in the mountains of upstate New York, those five men blended their hard years on the road, their rapidly changing lives, and their love of mountain music, gospel, spirituals, roadhouse blues, Stax soul and early rock’n’roll to create a magical new strain of American music.

“It was pure, from the source,” Robbie Robertson tells Uncut. “These were things that grew right out of the ground in the places that we had played, from the Ozarks to the Mississippi Delta to the dustbowl. You’ve got to gather before you give, and we had gone out there and learned this stuff. We had been together for seven years, it wasn’t like we had just been given instruments for Christmas, and these pieces we’d gathered along the way we were incorporating unconsciously into what we were doing – and, well, it all added up to something that didn’t sound like anything.”

It wasn’t just the music that seemed utterly out of time. On the inside cover of the record they looked like a gang of turn-of-the-century train robbers: sombre suits, short hair, a palpable air of unbreachable unity. The beards weren’t groovy, but rather the unkempt face furniture of the mid-west sharecropper. Even their name – a mere afterthought which nonetheless spoke volumes – was a cultural anomaly, its plain understatement resonating in the age of Quicksilver Messenger Service and Frumious Bandersnatch. Everything about Music From Big Pink was radically antithetical to the prevailing mood of the times.

“When it came out people were like, ‘Where in the world did this come from? What kind of music is this?’” says Robertson. “People acted like we were from another planet. That shocked me, but it was a good thing, because it made me feel that we were doing something that had our own character to it. It taught us a lesson: you need to take your own vibe with you. That idea had a tremendous influence.” In the 45 years since its release, those lessons, and that influence, have simply grown ever more potent.

Regardless of the true seriousness of Bob Dylan’s motorcycle accident at the end of July 1966, it was a matter of life and death for his backing group. After Dylan went into retreat, The Hawks were stranded. With the cancellation of 60 tour dates scheduled for the rest of the year, they were left kicking around New York, scratching for the odd session, a road band who had abruptly run out of road. “We were scrounging around and it was not very productive,” confirms Robertson. “The other guys were going back and forth to Canada and it built to a boil: we gotta do something.”

Dylan was squirreled away with his new wife and young family in Woodstock. Two hours north of New York, the town and its environs had long been a haven for writers, painters, actors and avant-garde musicians. Dylan was working there with Howard Alk on an edit of Eat The Document, the fractured documentary of his fractious ’66 tour. He invited Robertson, then later the rest of the band, to visit his rambling cedarwood house and take a look. Hawks drummer Levon Helm, having quit the Dylan tour in 1965, was off-radar, working on an oil rig in the Gulf of Mexico.

“At the time Woodstock was a lovely, low-key little art colony,” explains Robertson. “Once we were up there, there was a real feeling of artistic freedom in the air. It had its own thing and everybody gravitated to it. We went on a mission to find a place where we could work and which could be our little clubhouse, and then Rick found Big Pink.”

Early in 1967 Hawks bassist Rick Danko came across a four-bedroom house at 2188 Stoll Road in the backwoods of West Saugerties, five miles from Woodstock and “out in the middle of nothing”, according to The Band’s mercurial organist, saxophonist and accordion player Garth Hudson. It was hidden down a narrow track, surrounded by maples, pines and meadow, with views onto Overlook Mountain. Painted an unlovely shade of salmon mousse, the locals had nicknamed it Big Pink. The rent was $125 a month and in the spring of 1967 Danko, Hudson and piano player Richard Manuel moved in, while Robertson and his future wife Dominique took a house on the estate of Dylan’s manager Albert Grossman just down the road.

Big Pink was functional. It was “furnished, but not in a very glamorous way,” says Robertson. “There were leather couches, a dining table, beds in the bedrooms, just like a regular family home. Your basic needs were there.” The primary attraction was a long basement room with bare breezeblock walls running the length of the house, where they could install a basic recording set-up: an Ampex 400 tape recorder, two mixers and some microphones.

“This was something I’d wanted to do for a long time,” states Robertson. “We got a reel set up, got a rug in there. This was very unusual back then, people did not have home recording facilities. We didn’t know what we were doing, so I asked a recording engineer we knew to take a look at it, and he said, ‘Well, this is the worst situation I have ever seen. You’ve got concrete walls, a cement floor, and a big steel furnace in the middle of it. This is all wrong. Whatever you do, don’t do anything recording here because it’s going to be awful.’ This was very discouraging but it was too late – we didn’t have any choice. We’d already rented the place.”

Soon after they settled, Dylan began dropping in from his house on nearby Camelot Road, arriving late morning and playing music until late afternoon. At first the loose basement sessions roamed over the songbooks of Hank Williams, Johnny Cash and John Lee Hooker, as well as numerous traditional tunes, sea shanties, Irish ballads and nonsense verse. It was a reconnection to historic musical traditions that led, in turn, to a burst of original creativity. Scores of newly written pieces merged with ancient songs until it was hard to see the join.

“Bob would come every day and only leave to go home and have dinner with his family,” recalls Robertson. “He was out there five or six days a week and he was really loving what was happening. It was just a joyous, free feeling. I don’t know if I’ve ever seen Bob Dylan in a more relaxed state of mind.”