An early look at the horror remake and its soundtrack 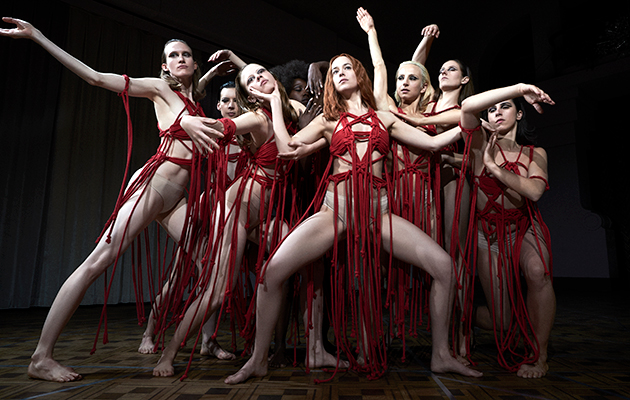 This Sunday, Thom Yorke celebrates his 50th birthday. As a teenager coming of age in the mid-Eighties, then, he would have been well-placed to watch a film like Dario Argento’s Suspiria – perhaps in its heavily edited VHS version on Thorn EMI. Colourful and hypnotic, Suspiria is one of those films guaranteed to stick with you – much as, say, impalement by meat hook might. The setting is a prestigious dance academy in Munich, run by an all-female staff overseen by a gaunt, charismatic director. But all is not quite as it seems. Students meet with a grisly fate – stabbed through the neck, hanged with telephone cables, impaled, throat slit – and the truth about the academy is finally revealed in a climax of baroque, supernatural horror.

Yorke is on hand to score the 2018 remake of Suspiria, directed by Italian filmmaker Luca Guadagnino. There are subtle shifts between the two films. Guadagnino relocates the film to Berlin, 1977 – the year Argento’s film was released – bolstering his depiction of the wintry city with real events taken from the ‘German Autumn’. When not dabbling in the dark arts, the academy’s staff find time to catch up with the hijacking of Lufthansa Flight 181 by terrorists sympathetic to the Red Army Faction. We see demonstrations in the streets while, early on, a bomb blast rocks the academy. These contribute to the growing sense of dread and disorientation Guadagnino creates. Nowhere is safe, it seems. Not out there and certainly not… in here.

‘Here’ is the Tanz Academy, founded by the mysterious Helena Markos and run by the formidable and demanding Madam Blanc (Tilda Swinton). As the film opens, a new student has arrived – Susie Bannion (Dakota Johnson), who has swapped her oppressive Amish upbringing in Ohio for something she discovers is just as oppressive and cult-like in Berlin. Ballet, we learn, is really just a means to exact terrible punishment against transgressors – or perhaps to nourish ancient and terrible entities.

The film works best in the first hour or so, where Guadagnino satisfyingly sets up his mood and eerie atmosphere. Unlike the screaming, lurid colours in Argento’s original film, Guadagnino favours a dull palette of browns, greys and greens. The academy seems perpetually underlit and slightly rundown; much like the rest of Berlin, it seems. There are a number of gruesome shocks early on – a dance routine, not for squeamish viewers – but largely Guadagnino is establishing mood. There’s no great reveal about the identity of the academy staff: they’re a coven of witches while the school itself is, as one outgoing member of staff describes it, “a box of rabies”. Factionalism is rife. Are you with Swinton’s gothy madam – or are you with the ageless creature with long fingernails that dwells in what appears to be Jimmy Page’s sub-basement?

Guadagnino returns to this theme of division and dysfunction. One character repeatedly travels between East and West Berlin. Susie tells Blanc about the religious schism between that Amish and the Mennonites in her childhood. Operational feuds occur between rival factions within the real life terrorist organizations. There is even a less specific separation at work, where a heavily disguised Swinton also plays a male psychoanalyst Dr Jozef Klemperer (she is mysteriously credited, though, as ‘Lutz Ebersdorf’). It is also a film about mothers. Susie and her own overbearing mother, bed-ridden back on the farm in Ohio; Susie and Blanc, her surrogate mother; and finally the ghastly Three Mothers whose arcane theology underpins both Argento and Guadagnino’s films. As you can tell, here is a lot going on here.

Yorke’s score, meanwhile, drones and glowers maniacally away in the background. In its way, it casts just as powerful a spell as the dance sequences. These are extraordinary invocations of their demon mother, upholstered by superb audio design: early on, Susie is led through a routine that acts as a spell, with every move the dancer makes exerting a ghastly physical impact on a disloyal student in another room.